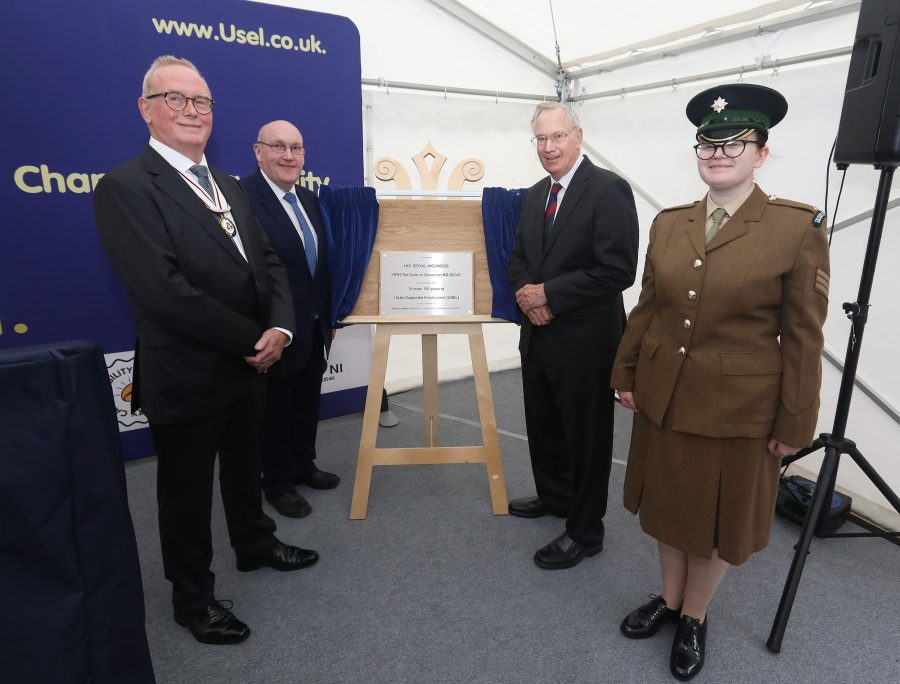 The Duke of Gloucester has visited the headquarters of Ulster Supported Employment Ltd (Usel) in Cambrai Street in Belfast’s Shankill Road to unveil a commemorative plaque celebrating 150 years of providing employment to people with disabilities.

During the visit The Duke heard how his family has a special place in the hearts of the people of Belfast after his father visited the city at the height of the Blitz in 1941.

Usel Chairman, William Leathem, introducing His Royal Highness, said that The Duke of Gloucester’s father, who was also Earl of Ulster, had visited nearby Percy Street, which had been devastated by bombing raids 70 years ago.

“Since then, the Gloucester family have had a close relationship with the people of Belfast,” he added.

The Duke, The Queen’s first cousin, was greeted at the Cambrai Street complex by, the Chairman of Usel, William Leathem; Chief Executive, Bill Atkinson; the Lord Lieutenant of Belfast, Fionnuala Jay O’Boyle and the Deputy Lord Lieutenant, Dr Alan Logan.

His Royal Highness was taken on a tour of the factory floor, chatting informally with staff about the various operations run by the company – bedding manufacturing, recycling, and industrial sewing departments.

During the tour, The Duke heard about the Circular Economy, the process of rescuing old products from landfill sites to create brand new products. He also met the company’s design and product manager, Andrew Bingham who demonstrated how they produce bags and PPE equipment for the emergency services.

The Duke chatted to Usel’s longest serving employee Brian Douglas, who has worked at the company for 44 years and two of its most recent employees, Beth Hagan, a server at one of the company’s Ability Cafes and Jordan Hall, who works in the admin department.

Brian said he joined Usel at its previous premises in Lawnbrook Avenue when he left school at 16. He worked in the sewing department making bags and other products. “I really like working here. I have been here for 44 years which shows it’s a great place to work,” he added

Jordan joined the company in June after completing a course in Digital Media Production at Belfast Met. After working in the recycling department, he moved into the office as a document handler. He also uses his digital design skills to make posters for the company. “It’s fantastic learning new skills and the people are so friendly. I have met some great friends here. It is a very friendly environment,” he said.

William Leathem said the main aim of the day had been to recognise the hard work of Usel staff: “We were delighted that His Royal Highness spent time and met staff in each of the departments. Without our staff and clients Usel wouldn’t exist,” he added.

It all began in 1871 when the formidable Mary Hobson, a passionate social reformer set up Belfast Workshops For the Blind, providing workspace for 20-30 people at rented premises in Howard Street.

At that time, the workforce made brushes, bundled firewood, manufactured baskets, mats, rope, and mattresses – which are still being made to this day at its factory in Cambrai Street.

Since moving to Cambrai Street, Usel has opened other branches in Ballymena, Derry/Londonderry and Portadown. It has also opened three ability cafes at Belfast Zoo, Lady Dixon Park, and the Spectrum Centre.

It is the largest direct supporter of people with disabilities and health related conditions and trains, supports and employs up to 1200 people across Northern Ireland every year.

The company also provides training programmes such as STRIDE (Support and Training to Realise Individual Development Employment) which helps hundreds of people with disabilities and health related conditions find work throughout Northern Ireland every year.