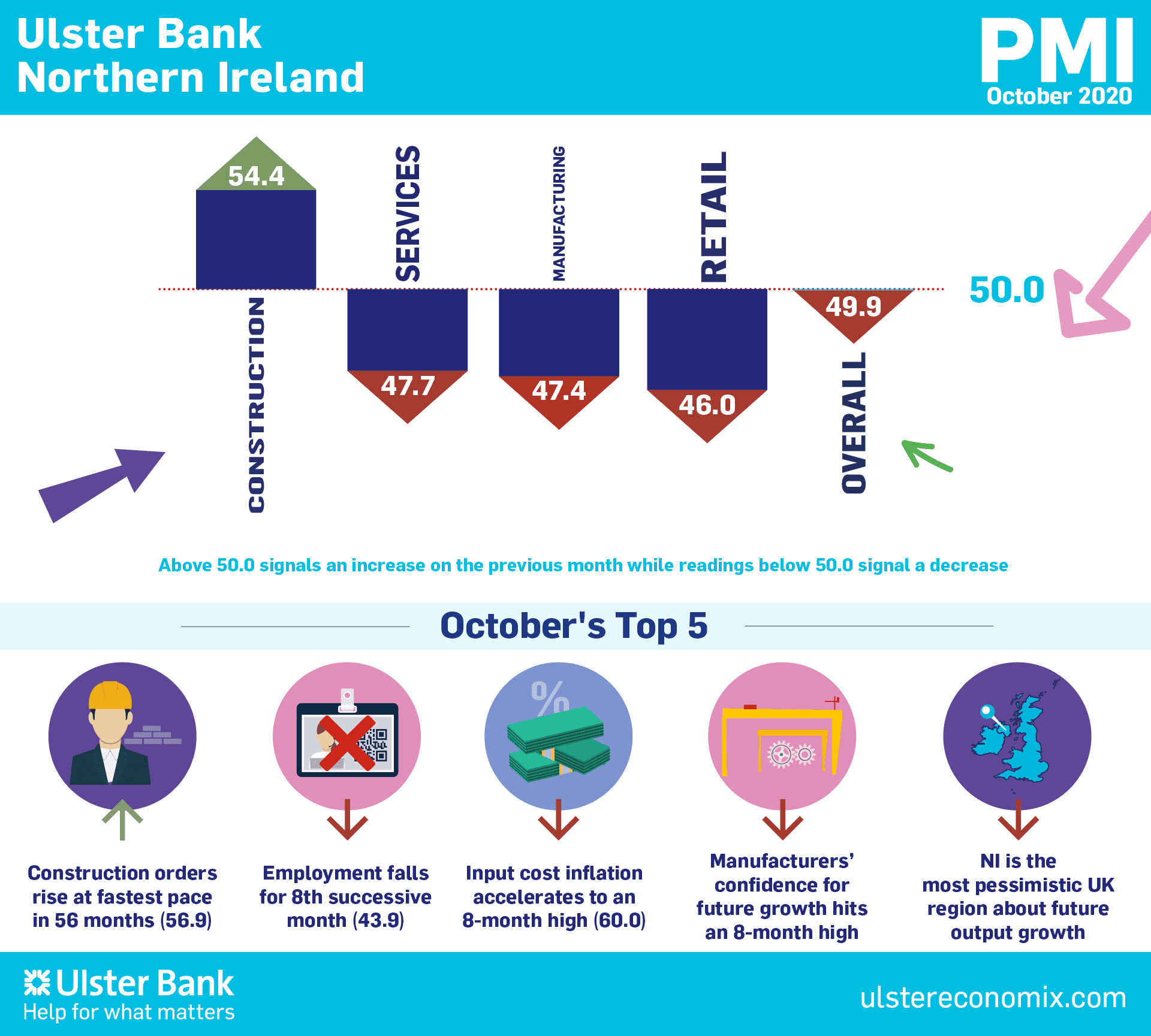 Commenting on the latest survey findings, Richard Ramsey, Chief Economist Northern Ireland, Ulster Bank, said: “Northern Ireland’s private sector ended the third quarter with output expanding at a modest rate. What little momentum there was has been lost during the start of the fourth quarter, with output growth stagnating in October.  Given the reintroduction of lockdown measures for some sectors during the second half of last month, this deterioration is not unexpected. With new orders posting their third successive decline in October and restrictions to remain in place for at least the first half of November, the prospect of a pick-up in growth anytime soon looks slim.

“It is noted that Scotland and Wales, who also reintroduced lockdown measures ahead of England, posted even sharper falls in output last month. Meanwhile Northern Ireland’s largest export market, the Republic of Ireland posted its second successive month of contraction. Subdued demand from the Republic of Ireland is contributing to the continued marked decline in local firms’ export orders. Against this background, alongside rising inflationary pressures, local firms are continuing to reduce their staffing levels at a significant rate.

“At a sector level, construction was the best performer for the second month running and was the only sector to record both output and orders growth in October.  Indeed, new orders increased at their fastest rate in 56 months. Clearly this rapid growth has been coming off very low levels of activity.  Manufacturing was the only other sector to see a pick-up in new orders growth. Services saw a rapid reversal in fortunes in October with output falling after September’s robust rate of expansion. More significantly, services orders slumped which is not surprising given the closure of the hospitality sector and other services firms due to lockdown.  Manufacturing, services and retail firms all reported significant falls in employment levels while the construction sector posted a modest reduction in headcount.

“The resurgence of the COVID-19 virus and the reintroduction of lockdowns across Europe is expected to see economies contract over the course of the fourth quarter. Northern Ireland is not expected to be any different with the economy set for an annual decline  of around 15% for 2020. The longer the restrictions remain in place the deeper the contraction will be. The extension of the furlough period until the end of March 2021 will provide some much needed certainty for businesses in an abnormally uncertain world.”

The main findings of the October survey

The headline seasonally adjusted Business Activity Index posted broadly in line with the 50.0 no-change mark at 49.9 in October. This was down from 51.9 in September and signalled an end to a three-month sequence of rising output. Where output fell, panellists mainly linked this to the coronavirus disease 2019 (COVID-19) pandemic. On the other hand, some firms reported strength in the housing market. In fact, construction was the only sector to see activity increase during the month. New orders decreased for the third month running, and to a greater extent than in September. Meanwhile, a further sharp decline in export orders was recorded.

Redundancies due to COVID-19 contributed to a further sharp reduction in employment. Despite this, there remained a lack of pressure on capacity, with companies able to deplete backlogs of work again. Rates of inflation picked up, with both input costs and output prices rising at sharper rates in October. The increase in input costs was the fastest since February, and reflected higher prices for raw materials and transportation as well as rising staff costs. The COVID-19 pandemic led to further pessimism regarding the 12-month outlook for activity, with sentiment more negative than in September.