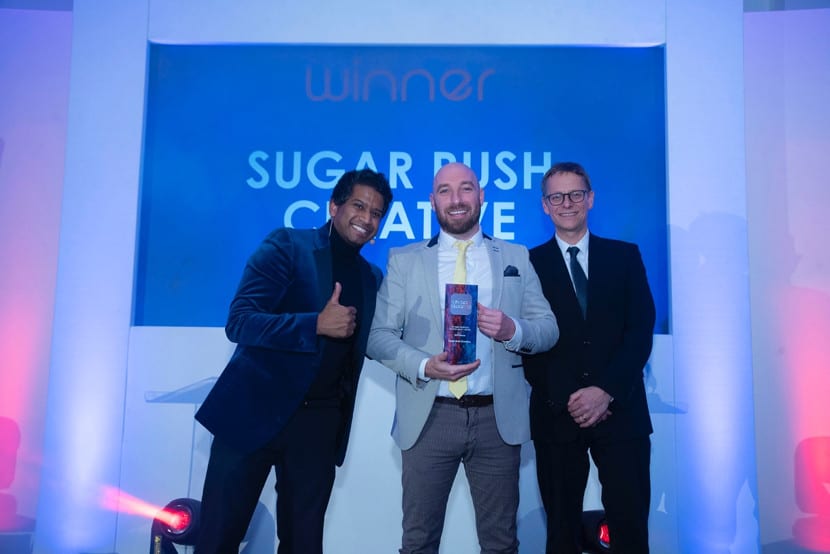 Local App Agency, Sugar Rush Creative has entered the new decade on a high, following a series of award wins underpinning the credibility of the agency’s business. Most notable of its recent accolades was being the only Northern Ireland based company to be awarded at the UK App Awards.

Multi award winning Sugar Rush Creative was named ‘UK App Agency of the Year’, beating off competition in the bustling UK technology sector from agencies based in Birmingham and London. At the ceremony in London Sugar Rush were also awarded highly commended for a client App ‘Changing Lives’, developed for the Probation Board for Northern Ireland, in the ‘UK App of the Year’ category.

Ali MacFarlane, Founder of Sugar Rush Creative, said: “It’s one thing to be the best in Northern Ireland and to also be acknowledged for our work by industry peers in Republic Of Ireland but for our agency to dip our toe in the water and enter two UK awards for the first time ever and win, has propelled our business to another level. On accepting the UK App Agency of the Year award I was truly humbled to receive such unimaginable recognition for the work that we do right here in Belfast.

“We were already securing global business having built a reputation of being a forerunner in app development, largely due to winning ‘App of the Year’ for three consecutive years in Northern Ireland but, since being named UK App Agency of the Year our business has sky-rocketed and we are planning significant growth in 2020 to meet current demand and, who knows, we might enter the large agency category next year.”

The UK App Awards, now in its third year, celebrates and rewards excellence in mobile apps developed throughout the UK with robust judging by a respected panel of industry experts.  Leading the way in app development locally and internationally, Sugar Rush Creative has a team of designers, developers, testers, animators and marketers which boasts an impressive clientele within the private and public sector, healthcare, engineering, entertainment, tourism, construction and manufacturing.