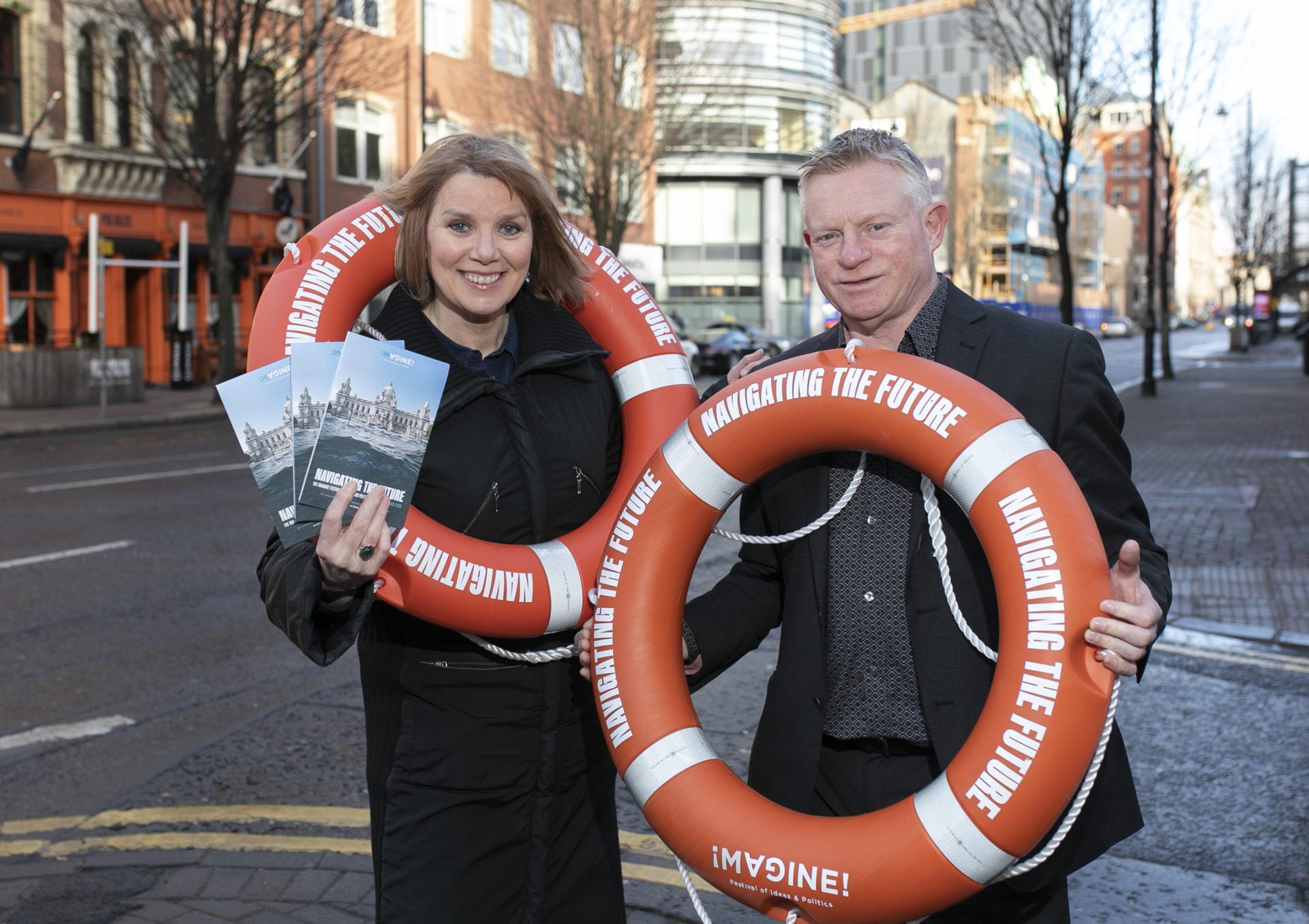 The 6th annual Imagine! Belfast Festival of Ideas & Politics has been launched by Nuala McKeever. The cast of Body Politics will also be appearing at the short event. The seven-day festival features a packed programme of 90 events involving over 300 speakers and performers in 30 venues across the city.

The unique festival returns during 23-29 March with its quirkiest ever programme and an open invitation for the public to discuss the big issues of our times. The strictly non-partisan festival offers up an eclectic week of talks, workshops, theatre, poetry, comedy, exhibitions, films and tours to help us navigate a volatile future. Most of the events are free and the organisers hope to attract over 8,000 people to this unique festival, particularly those who traditionally are not involved in political discussion.

According to Peter O’Neill, founder and festival director: “The festival provides a unique opportunity for people to engage with some of the big issues of our time in a fun and dynamic way. Over 300 speakers and performers will stimulate debate and discussion of new ideas relating to politics, culture and activism. There’s something for everyone in our eclectic programme – most of the events are free and accessible across the city. So join us in navigating a new tomorrow.”

The festival has a number of headline events including the world première of Nicky Larkin’s documentary exploring the creation of The Belfast Ensemble’s provocative Abomination: A DUP Opera. Other films include the Belfast première of the Quiet Shuffling of Feet, which sensitively explores the impact of conflict trauma on our society, and a screening where Loyalist and Republican former political prisoners explore the power of education in times of conflict.

Other keynote speakers include Chris Rapley CBE, Professor of Climate Science at University College London; Neil Jameson, the founder of Citizens UK, and a panel looking at the language of politics.

A major theme of the Imagine! Belfast festival is an exploration of the climate crisis with a range of speakers and events such as Professor John Barry responding to the planetary emergency; Green Visions – a reading of poetry and prose with Andrew Grieg and Chris Agee;  family art based activities relating to climate change; and workshops examining ‘Is more Economic Growth the Answer?’; ‘The Climate Strikes and Public Activism’; Storytelling towards a Sustainable Future; and ‘Trash Talk’.

Members of the public and arts groups were invited to submit events in November 2019 and a number of quirky submissions were received including the operatic recital ‘Singing the Good Friday Agreement’; a performance lecture on ‘Ulster’s Lesser Spotted Queer Protestant’; a social experiment involving ‘Conversations with Strangers’; Articul-8 the brand-new interactive gameshow that celebrates creativity and self-expression; and an evening with Count Binface!

Other events in the diverse Imagine! Belfast focus on Fake News; animal rights; the interaction between creativity and technology; community banks; graduate emigration; drugs policies; Universal Basic Income; the legacy of the ‘Troubles’; and ‘Brexit and Health’.

The funders for this year’s festival include VSB Foundation; Queen’s University Belfast; Community Relations Council; Ulster University and the Open University. The press conference is sponsored by event partner Linen Quarter BID who are hosting events with the Cabaret of Dangerous Ideas and the UK Parliament.

Chris McCracken, Managing Director at the Linen Quarter, said: “The Imagine! Belfast Festival provides a lively platform to consider new insights and ideas, and to discuss different points of view. As an organisation that promotes fresh thinking we are delighted to support a number of the events within Belfast’s Linen Quarter – a dynamic hub for innovation and informed debate. The festival is an ideal opportunity to once again promote the vibrant partnership between business and the arts, and support a more creative, diverse and outward looking City.”

The festival also presents a unique open call exhibition on the theme of ‘Art as Therapy’ with members of the public invited to submit artworks in the new Take Up Space Gallery in the Connswater Shopping Centre, East Belfast. The exhibition, jointly organised with Framewerk Gallery, aims to erode the stigma attached to poor mental health and promote a better understanding of mental illness.

Dozens of other discussions and workshops will cover the full range of issues that are on the news agenda at the moment. Highlights include talks on the upcoming US presidential election – the U.S. and Us; the future of the United Kingdom with Slugger O’Toole Navigating Unchartered Territory and Robin McAlpine, Director of the Scottish think tank Common Weal’s take on the future of the Union; workshops from Ulster University’s Transitional Justice Institute on the role of women in the Irish Unification Debate; three innovative events brought to us by the Transnational Institute; and a workshop from the Open University on Reading in Conflict.

In addition, we have a number of events interrogating aspects of local history with a talk by leading historian, Barry Sheppard, on Bicycles and Protest; a book launch by Fergus Whelan on the biography of Belfast United Irishman William Drennan; a talk on the life & times of the iconic feminist, Mary Ann McCracken; a discussion on what we can learn from history about religious toleration; and a humourous presentation from Rachel Hosker on who owns and manages history.

Imagine’s culture programme includes the premiere of Macha Productions exciting new play, Body Politics, at The MAC; a topical musical performance from Paddy Cullivan; a poetry event Reading & Righting; and political stand-up comedy and improv events such as Behind the Headlines.

Add to that five walking tours, two exhibitions, a poetry open mic recital and two dance movement events, and you can Imagine! the quirkiest festival in Northern Ireland.