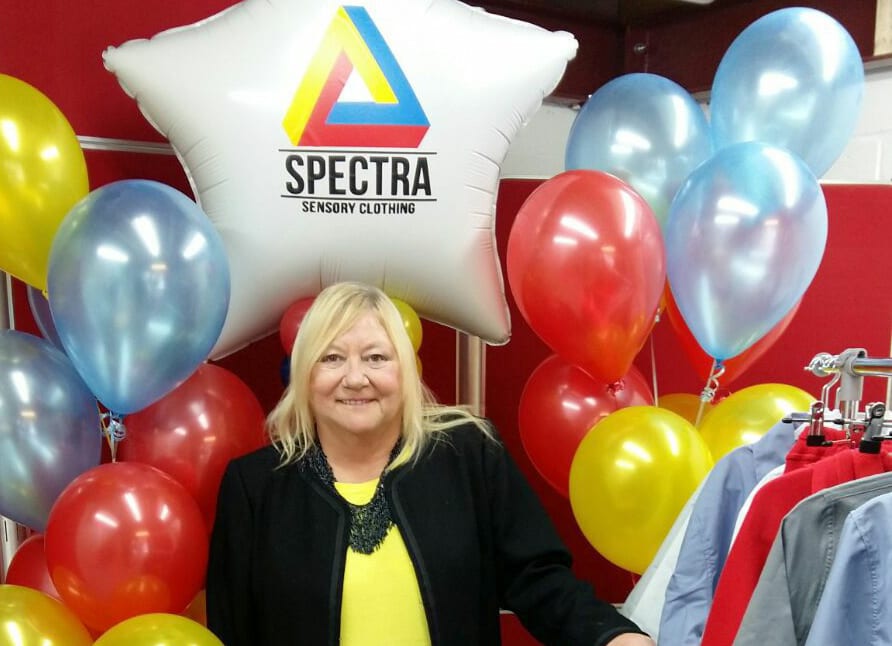 While adults are confused by the COVID crisis, parents of children with autism are faced with the problem of explaining the new world of social isolation and shielding.

For mum of two Meta Auden, owner of Spectra Sensory Clothing, the rolling news cycle produced the statement from her niece Emily that if she ended up in hospital, because of underlying health problems she was one of those who would not be saved – something her 19 year old autistic daughter Kirsty took to heart.

The situation in Northern Ireland has changed so dramatically that children on the autistic spectrum have been left with reliable routines disrupted, no visits to extended family members and little in terms of schooling.

Meta is clear that communicating with children on the autistic spectrum is essential given they are seeing so much on the news and online about Covid-19.

“We are bombarded on the news and online with this unfolding crisis,” she said. “But we mustn’t let it overwhelm our children. It is crucial that we take the time to understand it ourselves and communicate appropriately.”

“It will be the case that they have questions and we must not try and sugar coat what is a serious matter, especially as it may affect relatives that your child has an attachment to.”

And, as Meta explained it can be a challenge in terms of how the information is conveyed.

“The other thing about a child on the spectrum is they take everything very literal,” she explained. “The first time Kirsty heard the expression ‘it‘s raining cats and dogs’ she fully expected to see that.

“When the Prime Minister started an update with the words ‘some of you will die and many die before their time’ I can fully see why those words would impact on a child who looks at the world that way.”

Meta and her husband fostered then adopted Kirsty, and whilst they knew she had ADHD, it was later she was diagnosed with being on the autistic spectrum disorder that they began to understand Kirsty behaviour.

Despite having cancer post-natal depression after having her son Matthew, as well as high blood pressure, diabetes, heart disease and nerve pain from having a mastectomy and reconstruction Meta started her own business, as she says at the tender age of “57 and three quarters”.

It was Kirsty’s issue with clothing that prompted her to start Spectra Sensory Clothing.

“I would buy her clothes and she would never wear them,” Meta explained. “She never told me why, and we had arguments, when she was told off, she would be smirking.”

As she has developed a range of clothing designed specifically for children on the spectrum it has led her to meet other parents, and that connection is vital during the spread of Covid-19.

“The first thing you need to remember is you are not alone in dealing with this. Other parents and carers are considering how to cope and have the same worries that you may have,” Meta said. “If you have a friends network reach out to it through your phone, the internet or social media.

“There is a lot of comfort to hear ‘I know what you mean’ from another parent.

“The exchange of tips and ideas are vital, even just to have someone to speak to that understands.”

For Kirsty the change in routine has presented challenges.

“She takes the dog a walk around the block every day, but does not want to go near shops because she doesn’t want to see lines of people waiting.” Meta said. “She usually attends Specialiststerne a couple of times a week and these things have moved online with Zoom.

“She doesn’t like that at all and wouldn’t do it at first.

“She has taken to do doing jigsaws that she has had for years but never looked at them.”

and, Kirsty explained to her mum how she was trying to cope in her own way.

Following on from her niece’s comments about the potential if she went into hospital, Meta tried to talk to Kirsty.

“I asked her the other night before bed what were her thoughts on the whole crisis. She answered by saying that she was able to just let her mind go blank.

“What she said in her own words was ‘I am talking to you, but my mind is blank, I am not thinking about anything’.  What do you say to that?”

Despite being frightened in her own way Kirsty is coping

“I have to say that the whole isolation bit does not bother her at all,” Meta said. “I am not surprised as she never wants to go out and doesn’t even need to talk to people.

“When she was at school, people would feel sorry for her as she went to sit in Senco office on her own to have lunch but for Kirsty that was preferable to large canteen with noise and shoving.
“She took a packed lunch, but would not take a drink of anything all day, even with lunch as she was frightened she would have to put her hand up to go toilet.”

With everything that is going, Meta, like any parent would, wishes Kirsty could talk about her own fears.

“There is no way I can get Kirsty to open up about what is going on at the minute, I am sure she is frightened because everybody has said, because of underlying health conditions I am at risk, she even went as far as telling me that if I ended up in hospital I was one of those who would not be saved.

“It does mean that I have to hide any fear I have.”

With the daily news cycle and daily updates Meta hopes that parents will avoid situations that will increase stress.

“We all want to know the latest information as it emerges, but the round the clock media coverage can be overwhelming for adults let alone for children with autism,” said Meta. “You need to limit their exposure to it, as well as what you watch. When you watch or listen to the news be prepared to explain, discuss, chat or ease worries.

“It might be an idea to check online the latest updates from the likes of BBC News and give yourself some thinking time.”

Meta said that comfort is not always easy to give.

“We all know as parents and carers that there are things that your child reaches out for. Sitting in their favourite chair, wearing one item of clothing that is special, a toy they love, or their pet need to be on hand when stress triggers a response.”

For more information about Meta’s company Spectra Sensory Clothing which sources, manufactures and retails clothing, accessories and other products aimed at people on the autism spectrum go to spectrasensoryclothing.co.uk