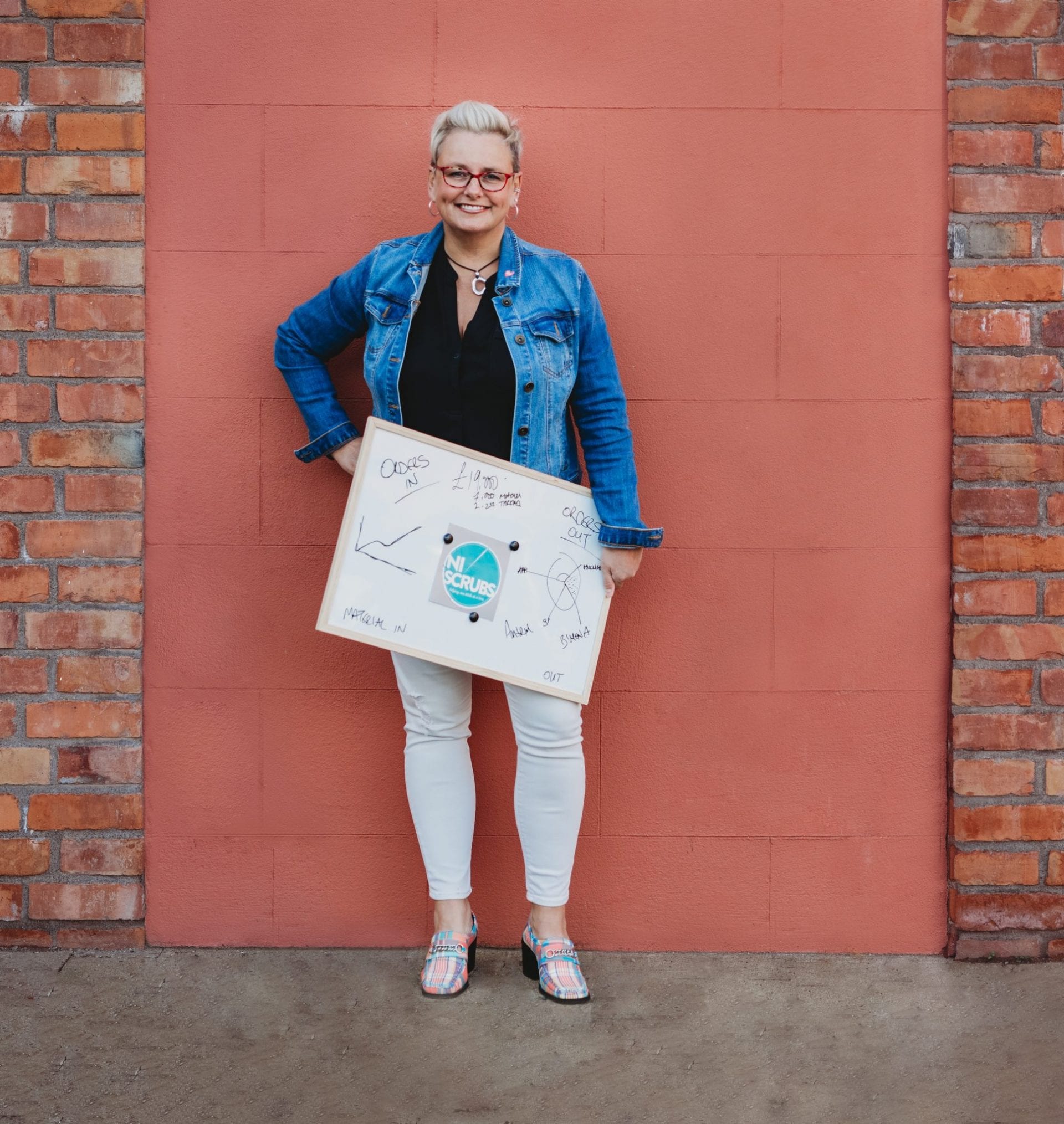 With the work of NI Scrubs closed, the titanic effort by all involved has left them reflecting on what the army of sewers and co-ordinators, including mother-of-two, Clare Caulfield from Ballymena.

However, at first Clare didn’t take up the offer to become involved as she has a full-time job and runs the BraveheartsNI charity supporting teenagers and adults with Congenital Heart Disease (CHD).

But as the situation unfolded in the early weeks of the pandemic she felt compelled to chip in.

“As things had started to emerge at the dire situation within our frontline I finally agreed to help as we desperately rely on our NHS for the care our Bravehearts need at all times. It was the least I could do,” Clare explained.

NI Scrubs wound down a few weeks back after the mammoth effort of pulling together thousands of people to sew scrubs, scrub hats and gowns for hospitals, hospices, care homes and other caring professionals with 106,000 items delivered to key workers throughout the Covid-19 pandemic.

The brainchild of Clara Maybin at the start of the first lockdown, when nursing and care staff were facing shortages, it grew from an appeal to become an army of 9,000 sewers, including Great British Sewing Bee contestant, Angeline Murphy.

And, the size of the group of people involved meant it needed coordinating and organising.

“I coordinated the Ballymena & Antrim Group – from my house,” explained Clare. “I met with Linzi, she set up the local group in response to Clara’s call for help.

“We talked through my living room window every day, even though we had not before.
And, from  there it spiralled as they quickly inundated with material and volunteer sewers.

“I organised hubs after getting the offer of premises at the Ballymena Salvation Army Hall and Fairytale Wedding & Events at Junction 1 Antrim,” she said. “The sheer volume of donated material took teams of volunteers (socially distancing) to sort it all out at the hubs. I organised drivers to collect material from people’s houses and take them to the hubs. Then taking material out to the mountain of volunteer sewers to get started making scrubs. There were a million things in between.”

Clara Maybin reflected on the sheer immensity of what they took on: “When I sit and think about it, it is madness,” she said. When I think of how tough it was it is very overwhelming.

“Every day got harder and harder, as more messages came through it was very hard to manage. And getting fabric to people up and down the country was so hard during the lockdown.”

For Clare, with her 21-year-old in the high risk category similar thoughts came to the fore.
“It was endless and exhausting and overwhelming,” she said. “At the time I was just too busy ‘doing’ I didn’t have time to think.

“With every frontline worker I took orders from came stories of what was actually happening in the hospitals and the community. It was often terrifying and I knew we had to keep going.

“Looking back I can see that I carried these real life, actually happening stories with me and it really affected me and caused me to be so scared and constantly worry about those that I loved and knew to be high risk, especially my daughter.”
The scale of the work Clare and others took on was something no one could have predicted.

“The routine was that I took all the orders which was an 18 hour a day job, every day for nearly nine weeks,” she said. “I took in over 250 orders, some orders were for over 600 sets of Scrubs. Each evening the hubs would then send me the list of finished scrubs that the drivers had brought back in from the sewers and I would allocate them through the long list of those waiting on them.

“Then I would contact those on the frontline to let them know their scrubs were ready. I’d then send this list back to the hubs and they put the orders together ready for delivery or collection. We got an incredible system going. By the time we finished up our group alone had over 250 active volunteers.”

One of those driving the effort was Great British Sewing Bee contestant, Angeline Murphy, who believes that the work of NI Scrubs will have a lasting legacy.

“I feel I have a duty to keep the stitchers together and use their skills for the greater good,” she said “I have formed another group NI Big Community Sew in line with the UK wide campaign to make face coverings for the vulnerable in society.”

Clare believes it showed the sheer character of people.

“I had the privilege to volunteer with an incredible group of people,” she said. “The majority of whom were complete strangers.

“I had the honour of speaking to those on the frontline and be able to tell them, ‘we got you’ and that we could help relieve their worry just a little and more often than not make them bright and colourful whilst doing it.

“But ultimately I got to meet, albeit it by phone or Facebook, the most amazing group of cutters and sewers who were often elderly and shielding.

“I got to know about them and their families, I knew when they were poorly, excited, proud or amused or struggling. They were adorable and seek no limelight.

“I can understand why we won the world wars if they had anything to do with it. To me they were what made us great, successful and more importantly what made us a community.”

For Clare she, like many, is adjusting her day-to-day job to the new norm but continues her work with BraveheartNI.

“Covid-19 brought new challenges for BraveheartsNI which we smashed and have emerged bigger and stronger,” she said. “We are now taking the time to look at repositioning ourselves in order to best serve those that rely on us.

Especially by putting contingencies into place in case this happens again. We are a small volunteer led charity who stood like giants through this strangest of times.

“I’m so very proud of our Bravehearts and our supporters, who when society needed charity & decency more than ever they stood together. Our Bravehearts especially my daughter and my sister and the care they receive from our frontline at all times is what drove me to keep going. It was the very least I could do.”