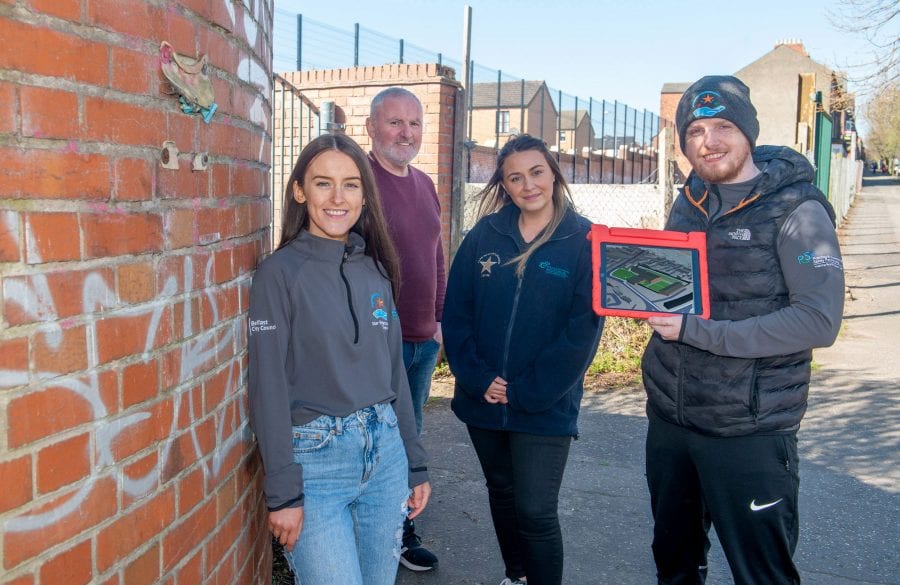 A ground-breaking augmented reality project uses up-to-the-minute tech to imagine how Belfast’s neighbourhoods could look without peace walls, thanks to support from the Community Relations Council (CRC) and The Executive Office.

A new app has been created as part of the Shared Futures, Planning For Change augmented reality project, funded by the CRC’s Community Relations / Cultural Diversity Small Grants Scheme and Belfast City Council, which allows people to create their own ‘artists’ impression’ of how their local streetscape would look if peace walls and barriers were removed and replaced with other buildings and public spaces.

The app has been developed by Belfast Interface Project with tech company Animorph and an innovation team at Essex University headed by Professor Peter Bloom and is being refined with the help of community leaders and young people across east, west and north Belfast.

Joe O’Donnell, Strategic Director of Belfast Interface Project, says barriers across neighbourhoods have been a feature of life in Belfast since as far back as 1921, and during the Troubles interface areas became one of the “running sores’ ‘ of the conflict.

“Right across the region, segregation has been a major problem and how to deal with it has been a big issue. We have a city with more than 100 walls physically separating communities,” he says.

While good work has been going on in interface areas for years to build good relationships between communities, the dialogue always hit a brick wall when it came to talking about when to remove the peace walls.

“Even in some of the most recent surveys by us and the Department of Justice and the International Fund for Ireland, people were saying they’d like to see the walls removed, but maybe in their children’s or their grandchildren’s lifetime,” Joe says.

“It’s not rocket science – lots of these walls remain in place because they give people a sense of safety and security, but the alternative has to be something that is bought into and agreed with communities, not just a quick fix.

“People fear those spaces are just going to be left open and all they see is a field full of rubble, so we needed to have an area of what the area is going to look like in five to 10 years. That’s how we came up with the idea of looking at new and emerging technology and the idea of using augmented reality to enable some of those conversations to take place.”

The first step was to create a series of images showing how interfaces could look as part of an intergenerational project, which proved hugely popular – however, with limited headsets it was only possible to show the images to small numbers of people.

Instead, Belfast Interface Project decided to create an app that could be installed on any anyone’s device and allow them to make streetscape changes for themselves, such as switching in a GP surgery or community centre.

“It started in east and west Belfast, so we have two prototype apps, one for the east and one for the west, and now we’re working on north Belfast,” he says.

At the moment, the team is working with groups including Limestone United cross-community football club, Star Neighbourhood Centre and the Ashton Centre:

“We’ve also had some absolute crackers – one of the young people asked for an underground rubbish removal system, or they’ve talked about buses on stilts.

“However, some of the people in North Belfast have been talking about a MUGA, a multi-use games area, on the waste ground that is currently there.

“While it is just an idea initially, we can send these ideas to Belfast City Council to be considered – that’s the idea, that it’s community-led.”

Belfast City Council has even asked if it can make use of the toolkit to refine the greenways that are being installed in the north and west of the city, he says, and the team area also hoping to bring the technology to look at the Waterside in Derry.

There is also a smaller ongoing project looking at how the toolkit could be used to reimagine communities as the country emerges from pandemic.

“Hopefully, this will give people a chance to see their area virtually without the barriers,” Paul says.

“This augmented reality app will give people a chance to start a conversation. If you talk about it in a meeting, they just clam up – nobody wants to talk. The idea is that if you give the interface community a chance to look at their own area, they can decide what they want from the safety of their own home.

The CRC’s Community Relations / Cultural Diversity Small Grants Scheme provides support to community/voluntary groups throughout Northern Ireland to help develop their capacity to engage in community relations work and supporting the Executive’s commitment to continuing the journey towards a more united and shared society.

To find out more information on the Community Relations Council visit: https://www.community-relations.org.uk/