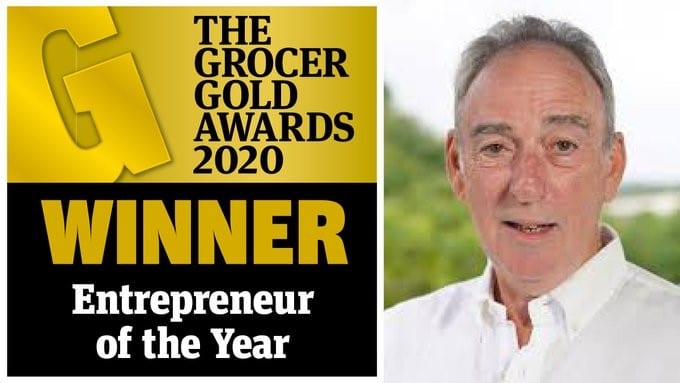 Denis Lynn, chairman of Finnebrogue Artisan, was awarded Entrepreneur of the Year at the UK Grocer Gold Awards, which was held digitally this year due to Covid 19 restrictions. The event was hosted by Grocer editor Adam Leyland who announced the winners of the hotly contested awards.

The Entrepreneur of the Year Award is for a leader in food who has recognised an opportunity or met an unsatisfied demand and shown the necessary commitment, leadership and self-belief either to create a new and successful business or to radically improve or turn around the performance of an existing one.

In leading Finnebrogue, Denis Lynn has overseen the firm’s extraordinary growth over the last decade. His restless innovation, and in particular, the launch of the UK’s first nitrite-free bacon, has firmly established Finnebrogue Artisan as a trailblazer in food production. He has established Naked Bacon as the biggest brand of bacon in the UK since its launch in January 2018.

It is the first mass-produced bacon in the UK made without the cancer-causing chemicals and has bucked the trend of declining bacon sales in the rest of the market. The UK bacon industry lost £1m a week in 2019 as a result of growing awareness of nitrites and their health risks in processed meats.

Starting out in 1985 by selling pizzas and pies out of a little white van, Denis quickly realised to be successful he needed to maximise volume and margin. In discovering a new French fry, he became the largest customer of Lord Chips in Europe and used the money he made to buy the beautiful Finnebrogue estate in 1991.

During the 1990s he was a beef farmer and then a deer farmer. Denis established Finnebrogue as the largest farmer and processor of deer in the UK, supplying Michelin star restaurants, top supermarkets and celebrity chefs.

Since then, he has been at the heart of many food revolutions, from the posh dog to the immensely successful nitrite-free bacon. He has grown the business’s turnover to £150m – producing premium sausages, bacon, ham, venison, and wagyu beef burgers – and now employs 870 staff.

In the last five years alone, he has opened three state of the art factories, and is due to open the firm’s fourth next month – a new £25m production site for next generation plant-based food.

In 2018, the Institute of Directors named Denis the UK’s most innovative director of the year.