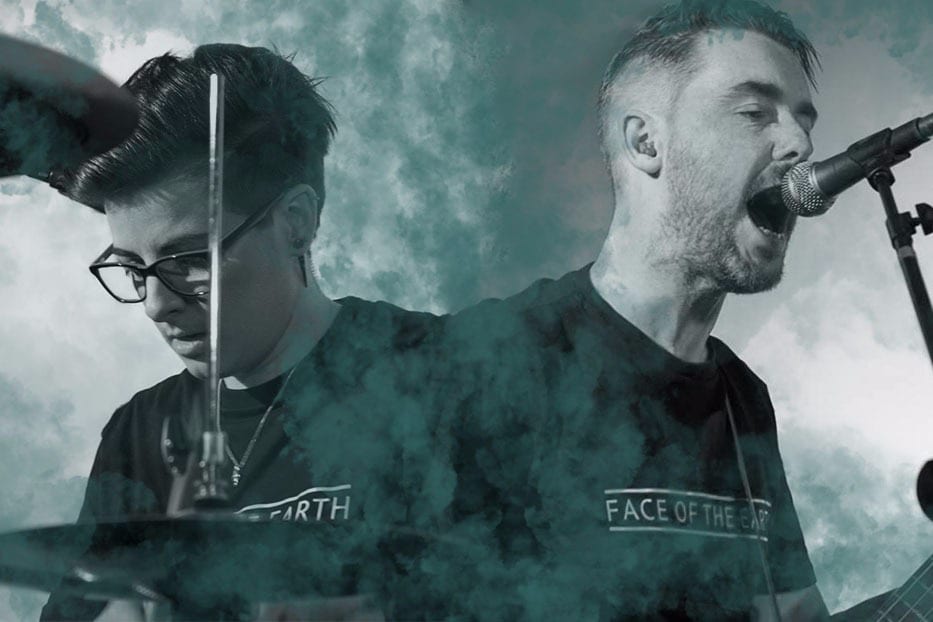 Face of the Earth, a ‘high energy rock’ two-piece from County Cavan, are dreaming of becoming the country’s next big music sensation after being selected as the Ulster winners in Four Star Pizza’s nationwide Star Nation 2020 competition.

Face of the Earth, featuring Fabian Gillick from Ballyhaise on bass and vocals and Siobhan Denton from Belturbet on drums, are one of four provincial winners, selected from more than 300 entries, who will now compete online for this year’s new People’s Choice award, before taking part in the Grand Final at The Roisin Dubh in Galway to win the overall title and a top prize of €3,000 of musical equipment from leading music store MusicMaker in Dublin.

Having begun their musical journey many years ago, Fabian and Siobhan came together in spring of 2016 and have since gone from strength to strength.

They describe their sound as ‘rock music you can dance to’ and released their self-titled debut EP in May of 2018 followed by a single ‘Naked’, the same song that has seen them progress into the Star Nation 2020 final.

“We decided to enter the competition because the prizes on offer were fantastic,” said Fabian. “Siobhan came across the competition on Facebook  and it was a no brainer really.

“It’s been a great experience so far to be involved, especially in the middle of Covid, and it’s been a real boost for both of us.

“We’re really excited about the next stage of the competition – because we didn’t expect to get this far!” he added.

All four provincial winners will receive a one-day recording session at the renowned Windmill Lane Recording Studios, following in the footsteps of artists like David Bowie, Lady Gaga, U2, Van Morrison, Kylie Minogue, Depeche Mode, The Rolling Stones, New Order, The Spice Girls, Kodaline and Snow Patrol… to name but a few.

This year’s competition will also see them compete on social media for the new ‘People’s Choice’ award in which the public will vote for one of the four finalists to perform at the prestigious Ruby Sessions in Dublin, which has hosted the likes of Ed Sheeran, Damien Rice, Paul Brady, Hozier and many more.

Voting for the People’s Choice Award will run from now until midday on August 17 on Four Star Pizza’s Facebook and Instagram (@fourstarpizza) pages.  Voting for your favourite artist will also get you a 5% discount on your next pizza order!

Finally, all four acts will perform live at the Grand Final at The Roisin Dubh in Galway on September 12 – where the overall winner will walk away with the voucher for €3,000 of musical equipment courtesy of renowned Irish music store MusicMaker, once described by Glen Hansard as ‘a vital artery in the Dublin rock scene’ and the place where famous acts like U2, Blondie, Muse, Manic Street Preachers and The National come to browse when they’re in town.

Four Star Pizza Communications Executive Christina Hamilton said, “I’d like to take the opportunity to thank everyone who entered Star Nation 2020 and to say a massive congratulations to our four regional finalists!

“We were completely overwhelmed by the record number of entries we received from local songwriters and musicians across the country.  The standard was incredibly high and to select just four winning entries has been an almost impossible task.  Our chosen finalists are all amazing and I’m  sure they will each represent their province well.

“Once again, this competition has shown that despite our small size, the island of Ireland is still one of the best places in the world for original musical talent!” she added.

Four Star Pizza is a wholly Irish-owned pizza chain with 61 stores on the island of Ireland, including 15 in Northern Ireland.  Last year was a record one for the company, in which it sold approximately 4.75 MILLION pizzas, using almost 63 MILLION pepperoni slices, more than 525 TONNES of cheese and 1050 TONNES of flour in the process.