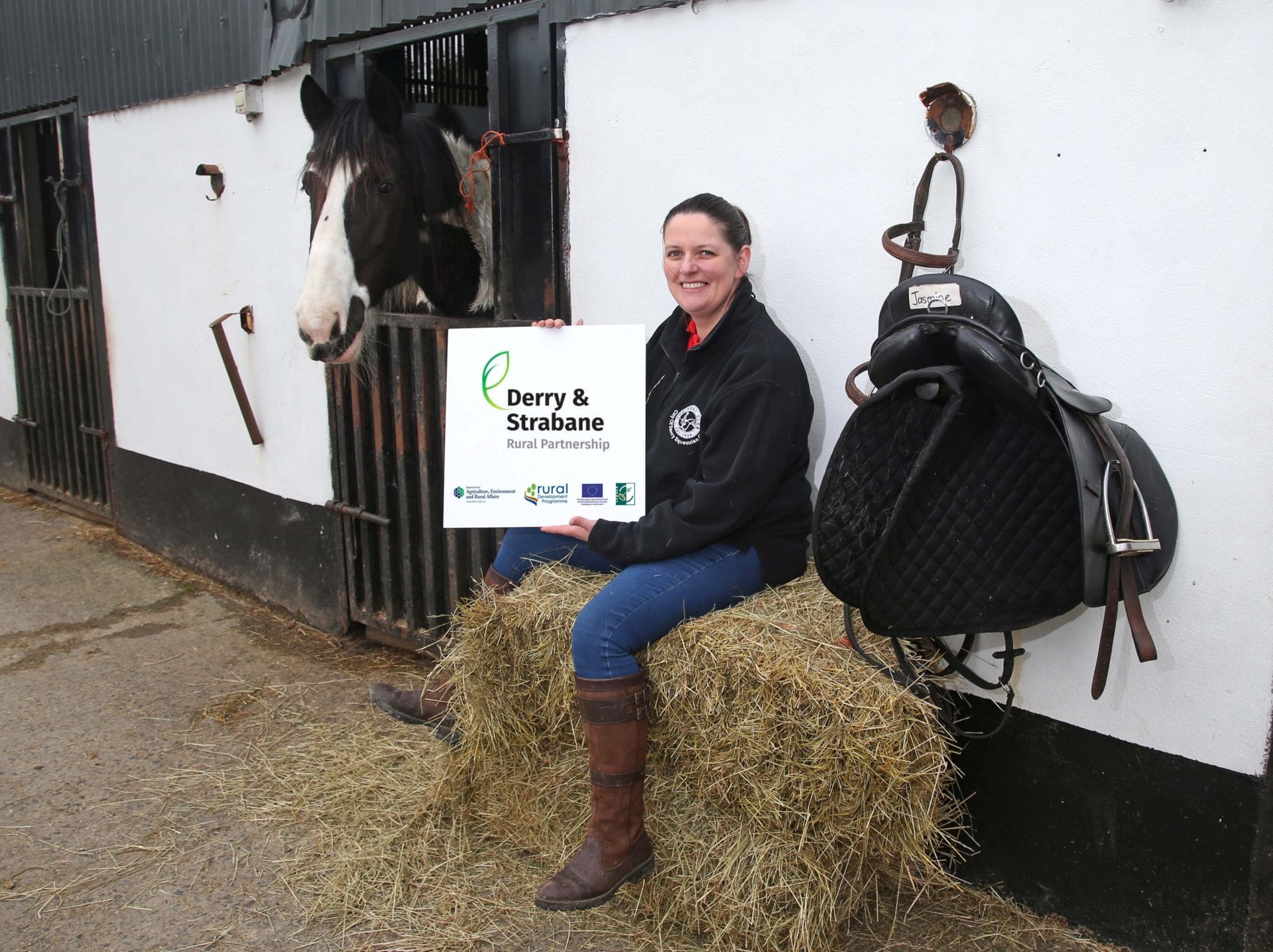 Tourism bookings have doubled for City of Derry Equestrian Centre that has led to the creation of three new jobs, thanks to a £5,000 grant from the Derry and Strabane Rural Partnership.

This project was part funded under Priority 6 (LEADER) of the Northern Ireland Rural Development Programme 2014-2020 by the Department of Agriculture, Environment and Rural Affairs and the European Union’.

City of Derry Equestrian Centre has not only doubled sales in one year, thanks to the support for tourism marketing activities from the Rural Business Investment Scheme, but it has also been able to diversify into new lines of business such as equine therapy.

Owner Pauline Lusby said she had established a successful family business focusing on weekend Pony Club activities for children learning to ride, but has now expanded the tourism side of the business due to the Rural Development Programme funding, creating 3 full-time jobs.

Pauline set up City of Derry Equestrian Centre at the family farm at Ardmore 11 years ago after noticing the lack of opportunities in the area for children learning to ride.

A Pony Club Centre, the business focuses on fun, friendship and horsemanship for the young riders, allowing them to achieve qualifications and avail of the opportunity to become junior instructors once they reach a certain level.

“It’s a great way of allowing young people to use the stables as a springboard for their future development,” Pauline says.

However, Pauline noticed the potential to tap into a growing tourism market, as visitors to the North West from the USA and Canada seek out trail riding opportunities, particularly in areas such as the Faughan Valley that can offer spectacular countryside and a rich historical backdrop.

The funding from the Rural Business Investment Scheme has allowed City of Derry Equestrian Centre to target its tourism marketing more effectively by creating high-quality marketing collateral such as leaflets and flyers, a state-of-the-art professionally designed website and effective digital marketing.

“When you’re trying to target tourists, who are coming to the North West, you need that professional interface, “Pauline says.

“I was aware that we hadn’t tapped into that really huge tourism potential. I had been involved in a project with the city council called Slow Adventure which focused on attracting people into the countryside and that made me realise that there was a lot of tourism potential in the Faughan Valley with its rolling hills and stunning countryside.

“The money that we have been able to invest in tourism marketing has provided me with a professional platform and we have been getting quite a few enquiries from visitors from the USA and Canada who are staying in Derry and want to go horse riding.

“Some of our visitors want to go on a trail ride and canter or gallop, while others are keen to learn more about the local area and its history. My grandparents have been here since the early 1900s so we are able to share that history and tell our visitors about the local characters who have lived around here.”

Pauline says the new marketing materials have also helped to highlight what the equestrian centre can offer and in turn that has allowed them to develop new lines of business.

Equine therapy is a treatment that uses interactions between humans and horses to help patients to develop needed attributes and to address emotional and behavioural challenges.

City of Derry Equestrian Centre is now working with Start 360 and Ascert to offer this form of therapy to young people.

“We’ve found that in the cases of young people where traditional counselling hasn’t worked, they are able to engage better in an equine setting, and after this therapy they are able to open up much more,” Pauline says.