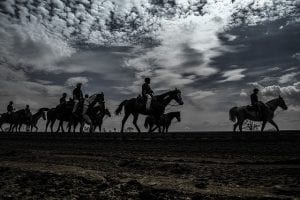 Back in November, Nick Scholfield broke his leg in three places following a horrible accident at Fontwell putting him on the sidelines ever since. He is set to return to racing this week, as Sky Pirate, who emerged victor of Saturday’s Warwick Cup, is the amount he is hoping to return for.

Scholfield succumbed to the worst injury of his career at the Sussex track on November 6 after moving past the line in fourth while riding Shintori, who was trained by Jack Barber, he made a collision with Go Steady, who had no jockey.

Scholfield had been hoping to ride Sky Pirate, which is owned by Martin Tedham, on Saturday but was eventually unable to due to the doctor’s advice.

Following an impressive success achieved with Jonjo O’Neill in the Edward Courage Cup at Warwick, Sky Pirate emerged as a potential Sporting Life Arkle challenger, which when Scholfield will have his chance again.

Speaking to the media on Sunday, Scholfield said: “I feel good. In an ideal world I’d have been back for the weekend but Dr [Jerry] Hill, the chief medical adviser, preferred I had another week. I broke it in three places and you have to respect what they say, but I’m back riding out and the Peter O’Sullevan House has been great throughout.

“With Covid-19 there have been no gyms so to have that facility has been great. If I’m not back this week, hopefully, it will be next and there’s still plenty of good racing to come.”

The Grand Annual Handicap Chase has formerly been stated to be a potential target for Sky Pirate in the Cheltenham Festival as trainer Jonjo O’Neill didn’t rule out the race on Sunday while there are some impressive bets on TWE’s Cheltenham site that were available for the race that was held.

Despite having quite an amount of experience in fences, Sky Pirate is still a novice in the game. This makes the Arkle a good alternative to the eight-year-old according to his trainer and Scholfield could possibly take on Shishkin and others in the Grade 1 event on March 16 as he will be looking to return to the game with a comeback victory.

Speaking about Saturday’s victory in the handicap chase, Scholfield said: “It was brilliant for Mr. Tedham. He’s put a lot into the game and is a big supporter of racing. It’s nice to see him reaping the rewards with what I would call a proper Saturday horse.”

The jockey believes that Sky Pirates has a huge advantage if they were to take upon the Arkle path, considering the eight-year-old has run 12 times over fences under rules.

“He’s an experienced novice and ran to a mark around 150 on Saturday,” Scholfield said. “If you’re in the 150s it can be hard to win handicaps, so being a novice is a golden ticket because it gives you that option. Jonjo knows what he’s doing so we’ll leave it to him.

“Shishkin is looking like the red-hot favorite [for the Arkle] but he’s only had two runs over fences around Kempton and Sky Pirate has had a solid handicap campaign. You only get one crack at it and it would be nice if Mr. Tedham could have a Grade 1 runner at Cheltenham.”