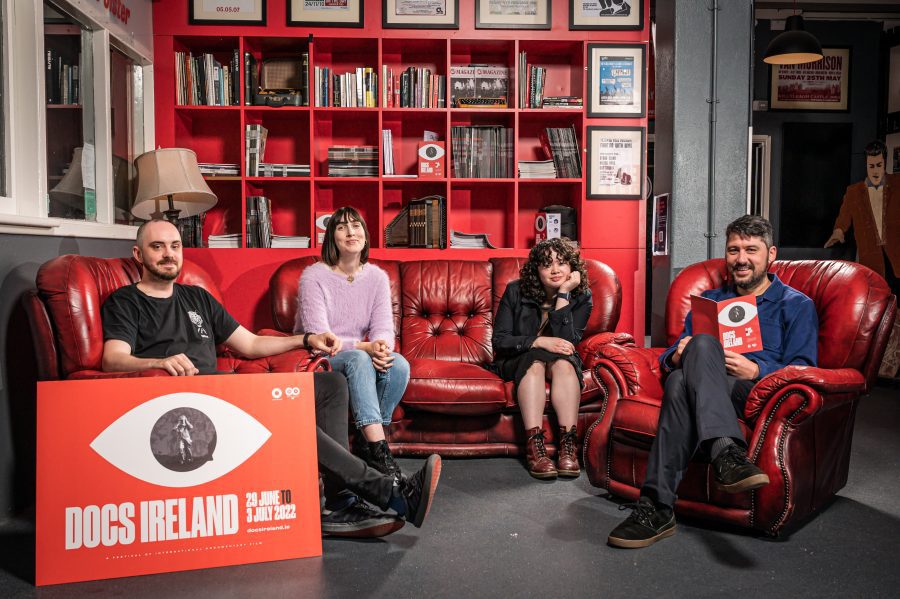 Docs Ireland, the international documentary film festival, will welcome hundreds of people back to cinemas across Belfast today as it celebrates its fourth year.

Sinead O’Connor, Kenny G, James Joyce and Princess Diana are just some of the interesting people who will be profiled on film at the international documentary festival, running from today (Wednesday 29 June) to Sunday 3 July.

The festival will hold film screenings and events in which industry professionals will hear from both rising stars and documentary filmmaking legends.

‘Nothing Compares’, a documentary based on the life and career of Irish singer Sinéad O’Connor will open this year’s festival. Directed by Belfast-born filmmaker Kathryn Ferguson, the documentary will screen tonight, reflecting on the legacy of the singer, and following her rise and fall over a five-year period (1987-1992).

‘Listening to Kenny G’ by globally recognised documentarian Penny Lane will close the festival on Sunday 3 July, and takes a deeper look at how the acclaimed instrumentalist reimagined the Smooth Jazz genre.

Music and culture are two key themes of this year’s festival with documentaries including ‘Laurent Garnier: Off the Record’, a look at one of the leading visionaries of the house music genre; ‘Tramps!’ by Kevin Hegge delves into the flamboyant, fresh style of the new romantics in London in the 1980s; and ‘Songs for Drella’ a 1990 concert film, only rediscovered recently, which captured the only reunion of The Velvet Underground and the life, dreams and aspirations of the band and its manager, Andy Warhol.

The programme also includes industry sessions for both emerging and established filmmakers, which allows for networking and hearing first hand from industry professionals on current affairs and issues relevant within the documentary world at the moment.

Gavin Esler (broadcaster, novelist and journalist), Trevor Birney (filmmaker – No Stone Unturned), Alison Millar (filmmaker – Lyra) and Una Mullally (broadcaster and writer) will make up a panel to discuss the State of Journalism, both in documentary, and the wider media landscape.

‘The Whole Picture’ features speakers from the Irish and UK documentary industry examining the film industry’s mental health crisis. Hosted by Andy Glynne, the open discussion event will look at how conditions in the industry can be improved to support mental health and wellbeing.

The documentary festival has fast become a forum for new and emerging documentarians to broadcast their own films. The Docs Ireland – Northern Ireland Screen Documentary development pitch returns for the third year, presenting six feature documentary project pitches from filmmakers across Ireland, in a competition to receive an award of up to £7,500 towards a pilot for their documentary feature.

Director of Docs Ireland, Michele Devlin said: “Docs Ireland gives us the opportunity to explore the culture, art and music of the world around us with some of this year’s most interesting global documentaries. As we move past the pandemic and into a new era, Docs Ireland looks to shed light on those who do incredible things in the documentary world and showcase it to a wider audience.”

“With documentaries from some of the most celebrated documentarians including Penny Lane and Kim Longinotto, as well as up-and-coming stars such as Belfast-born Kathryn Ferguson and Anna Rodgers, who previously won our Docs Ireland Shorts Award, there truly is something for everyone in this year’s programme.”

“Every year, we bring leading industry experts to Docs Ireland to interact and support our emerging and established local filmmakers. As well as our industry sessions involving documentary industry experts, the Docs Ireland Marketplace is a brilliant opportunity for any aspiring filmmaker to meet with leading international documentary industry decision-makers, funders, broadcasters, distributors and exhibitors on a one-to-one basis.”

“The next five days promises to be the place to be for industry professionals, aspiring professionals and those who just love a good documentary.”

Programme and ticket information can be found at www.docsireland.ie.