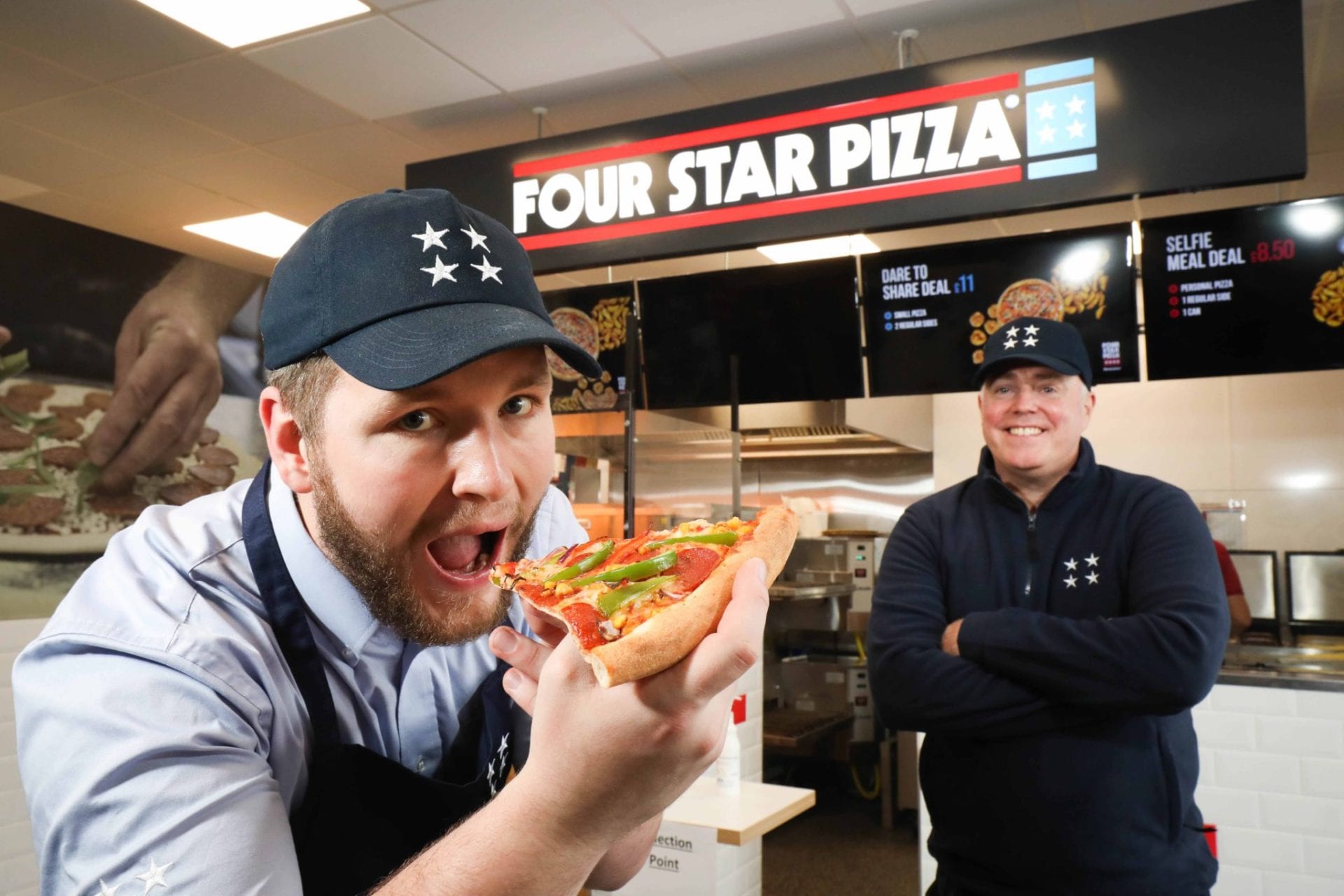 Pizza lovers in Craigavon are celebrating the news that Four Star Pizza has opened its first takeaway in the town with a £120,000 investment which will create 10 new jobs in the area.

The new store, which is situated within the Centra on Lake Road, Craigavon and is the first of its kind in Northern Ireland, officially opened its doors this week.

The store is the pizza chain’s 61st location across the island of Ireland and is expected to deliver more than 80,000 FRESH PIZZAS to homes in the Craigavon area over the next 12 months – using OVER ONE MILLION pepperoni slices, 10 TONNES of cheese and 17 TONNES of flour in the process.

Lorne Greene, owner of the Craigavon store, is confident that the new store will go down a treat with locals and explained how it has been in the making for some time.

“I’m absolutely delighted to announce that we have now officially opened our new store in Craigavon. We have invested  £120,000 in the new store, and we’re really pleased that we can contribute to the local economy with 10 new jobs for store staff and delivery drivers to help us meet the demand from customers in the area,” said Lorne.

“We’ve wanted to open a store in Craigavon for some time now because we’ve always known that there is a real demand for Four Star Pizza here, and now that we have the right location, we can’t wait to start serving up some honest pizza to the people of Craigavon.

“This is the first Four Star Pizza in NI to be contained within a Centra and the location couldn’t be more convenient. Pizza lovers can not only decide which delicious Four Star Pizza they want, but also fill up their car with petrol and shop for anything they need around the house whilst they wait to pick up their order!” added Lorne.

And when it comes to tickling the taste-buds of local pizza aficionados, Lorne believes that the secret to a perfect pizza is ‘all about the base’.

“What will surprise a lot of our customers is that we actually make our own dough, fresh in store, each and every single day. That’s what makes a big difference between us and our competitors when it comes down to the crucial taste test.”

To celebrate the new store, Lorne and his team are offering customers the chance to avail of a launch deal where they can enjoy a large pizza with up to four toppings for only £8.

“We want to let the people of Craigavon and the surrounding areas know that we are here, so we will have some great prizes up for grabs on our Facebook page this week. Make sure you visit our page for a slice of the action!” said Lorne.

Pizza lovers can contact Four Star Pizza Craigavon by phone on 028 3814 0444, via their website at www.fourstarpizza.co.uk, by downloading the Four Star Pizza app or visiting the store’s Facebook page.  Alternatively, customers can visit the store at Centra, Lake Road, Craigavon

Four Star Pizza is a wholly Irish-owned Pizza chain, established in 1988, and operates 61 stores across the island of Ireland, including 15 in Northern Ireland.