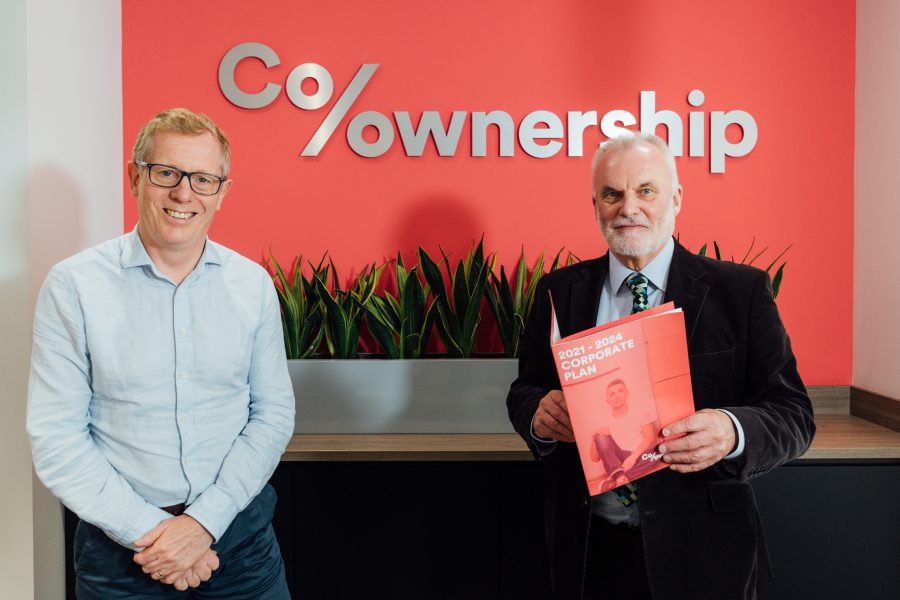 Back in 2020, Co-Ownership was provided with funding of £145m by the Department for Communities to support the delivery of 4,000 affordable homes by March 2024. To date the organisation has helped 1,681 people into home ownership with this funding and is confident it will achieve the goal of helping 4,000 people into homeownership by 2024.

With funding support from the Department for Communities, Co-Ownership can offer alternative housing products to people who otherwise would not be able to own a home of their own, and is currently helping almost 10,000 customers.

Communities Minister, Deirdre Hargey, said: “Co-Ownership plays a significant role helping people into homeownership. I commend the organisation’s plans for the coming years as it is hugely important that as many people as possible have the opportunity to own a home of their own.

“In January 2021, my Department allocated further funding of £13m to support first-time buyers affected by the pandemic which will deliver over 400 additional affordable homes by March 2022 and we will continue to respond to people’s needs alongside Co-Ownership to support those who need it.”

Co-Ownership’s primary product, Co-Own, offers successful applicants the opportunity to purchase a property up to the value of £165,000 anywhere in Northern Ireland. Successful applicants take out a mortgage on the share of a home they can afford between 50% and 90%. Co-Ownership covers the remaining share and as they become able to, co-owners can increase their share if they wish to do so, until they own the entire property.

As a not-for-profit organisation, any money received by Co-Ownership is used to help more people who wish to become homeowners.

The model has proven effective since its introduction in Northern Ireland more than 40 years ago with almost 20,000 people who started as co-owners now owning their homes outright. Over the next three years, the organisation predicts that at least a further 1,800 customers will have bought out and moved to full home ownership, no longer needing the assistance of Co-Ownership.

Mark Graham, Chief Executive of Co-Ownership, said: “Shared Ownership Week is a valuable reminder to everyone that there is more than one way to own a home of your own. We’re delighted to take the opportunity today to publish our ambitious plans for the next three years. Our vision reassures people that we will continue to develop both our organisation and our products to ensure that homeownership remains affordable, and that those who require an alternative way to own a home of their own are supported.

“The market remains challenging, and many mortgage products are simply not an accessible option for everyone and without alternative routes to homeownership, many people would continue to be alienated. Year-on-year we support around 10% of the first time buyers’ market.”

A recent study by Co-Ownership revealed that 78% of those who bought a home through Co-Ownership reported improved health and wellbeing, and 79% said they feel more financially secure.

Commenting on the positive social impact of homeownership, Chair of Co-Ownership, David Little said: “Our work isn’t driven by getting people inside four walls. It’s driven by the fact home ownership greatly improves a person’s financial, physical and psychological health, and so everybody should have the opportunity to own their own home.”