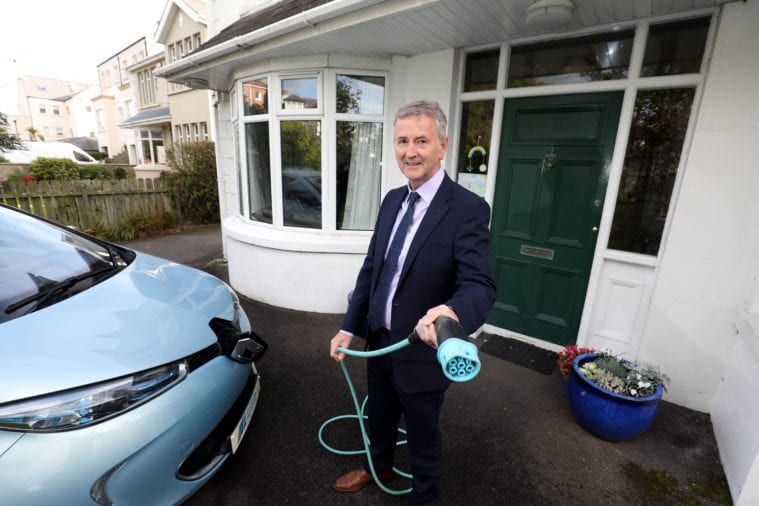 NIE Networks has called on customers who have installed or plan to install an electric vehicle charger to notify them, in order to help them improve the electricity network infrastructure in Northern Ireland.

It comes in response to recent statistics showing that although there are almost 3,500 electric vehicles registered in Northern Ireland, NIE Networks has only received notification of around 1,300 domestic charge points.

The utility needs to be notified if a customer plans to install a domestic charge point, or even if they just plan to charge the vehicle via a normal 13amp plug, so it can invest in the electricity network where needed and ensure the network has sufficient capacity. It is also critical for safety and ensuring a property does not exceed the supply capacity.

With the UK Government announcing a ban on the sale of new petrol and diesel cars from 2035, and a similar target expected to apply in Northern Ireland, Ian Bailie, Network Development Manager at NIE Networks, wants to make sure the network remains fit for purpose as the uptake in electric vehicles rises.

“We want to see a continued rise in the uptake of electric vehicles, which is something that NIE Networks is very proud to play a role in facilitating,” he added.

“It is a crucial step towards building the energy sector of the future, and all we ask is that our customers notify us if they have installed or are thinking of installing a charge point, so that we know where the new demand is and can build the network capacity that our customers need.

“At present, we are able to make the financial investments needed and if the electricity supply isn’t adequate for a domestic charger to an existing dwelling, we will carry out network reinforcement for customers free of charge.”

NIE Networks has led the way in connecting renewable generation to its network with 23,000 customers in Northern Ireland now generating energy from renewable sources.

With 46% of the total annual electricity consumption in Northern Ireland now being generated from local renewable sources, NIE Networks has played a critical role in making that happen by providing the network connections for the renewable sources and investing £365 million in the network to facilitate the generation.

As Northern Ireland works towards the target of a net zero carbon economy by 2050 the electrification of transport will play a fundamental role in meeting that target. NIE Networks wants to ensure that through the right planning and investment, it can minimise costs for customers and support them in their efforts to cut emissions and live a more sustainable life.

If customers have installed, or plan to install, an electrical vehicle charger, they can submit their notification to NIE Networks online in just a few minutes by visiting nienetworks.co.uk/connections/low-carbon-technologies.