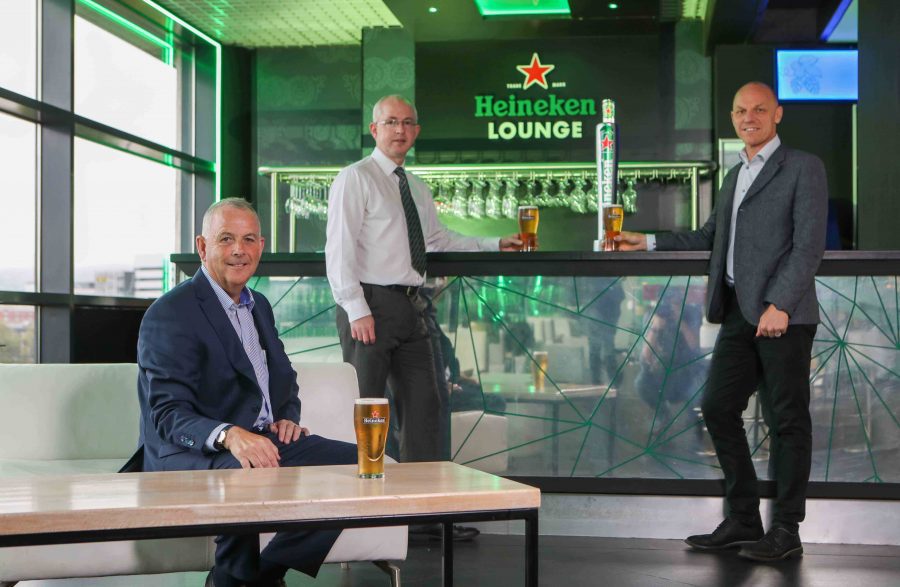 Heineken has agreed a new five-year contract with The SSE Arena, Belfast, which will see the company continue as the venue’s exclusive beer and cider partner until at least 2026.

The long-standing partnership, which has been in place since 2014, will provide Heineken with branding throughout the Arena, including digital screens and on the ice, as well as opportunities for customer entertainment and hospitality.

Within the new deal, plans include the upgrading of the existing Heineken West Lounge to create a brand-new look and feel for visitors. This lounge will offer guests the opportunity to relax in luxurious contemporary surroundings with a dedicated bar and an extensive food and drink menu.

“We are delighted to renew our partnership with Northern Ireland’s premier entertainment venue for another five years,” said Martin McAuley, Managing Director for Craigavon-based United Wines, which handles all of Heineken’s sales, marketing and distribution in Northern Ireland.

“The SSE Arena plays host to some of the biggest stars in the world of entertainment so is a great fit for a locally and internationally renowned brand such as Heineken.

“As home to the Belfast Giants, The SSE Arena partnership also reinforces Heineken’s sporting credentials in Northern Ireland, alongside our commitment to develop local sports and clubs. I suppose one could say it’s a ‘match’ made in heaven!” added Martin.

Dermot McGinn, Group Head of Food and Beverage for Odyssey Trust, which owns The SSE Arena, said: “We are pleased to renew our longstanding partnership with Heineken, one of the biggest brands on the planet – and one that is synonymous with entertainment in the worlds of sport and entertainment.

“We’d like to thank Heineken for their continued support of The SSE Arena, and we look forward to working together on a range of exciting plans over the next five years – to further develop and enhance our food & beverage offering so we continuously improve the customer experience here at the Arena.”

Steve Thornton, Group Head of Commercial for Odyssey Trust, added: “We’re delighted to be extending our partnership with Heineken and looking forward to a full event programme for 2022.

“We have a busy calendar of events scheduled, encompassing everything from ice hockey to comedy shows, theatre events and concerts – all the experiences that people have missed so much during the pandemic.”

The SSE Arena, located in Belfast’s Titanic Quarter, has been hosting world-class events for over 20 years, including the MTV Europe Music Awards, World Police and Fire Games, BBC Sports Personality of the Year, and concerts from the likes of Bruce Springsteen, Beyoncé and U2.

Founded in 1985, United Wines boasts a strong portfolio of Beers, Wines, Spirits and Soft Drinks that it distributes from its 75,000 square foot warehouse in Craigavon to an extensive On- and Off-Trade customer base on the island of Ireland – including more than 1,000 bars, restaurants, hotels, off licenses, cash & carries, regional wholesalers and national multiples.

In 2017, the company, which employs 50 people on the island of Ireland, was acquired by parent company Heineken.