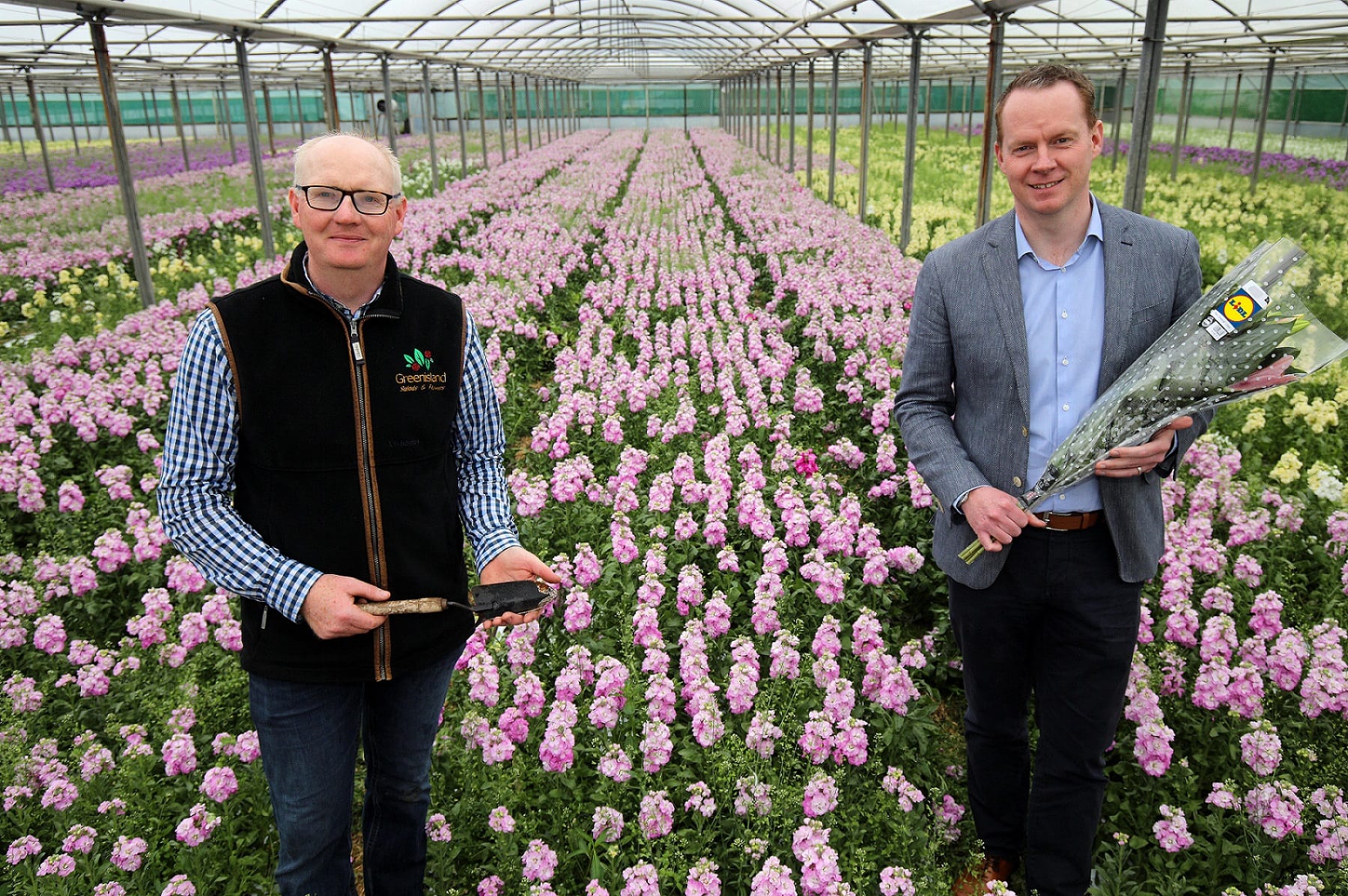 Horticulturalist Greenisland Flowers is blooming today after securing a new supply deal with Lidl Northern Ireland to ship more than four million stems of freshly cut tulips, lilies and scented stocks to its 202 stores in Ireland and Northern Ireland

With over 40 employees, the Portadown-based company which has two sites across six hectares in Craigavon has been growing retail-ready fresh flowers for over 18 years and this latest contract will take its longstanding relationship with Lidl Northern Ireland up to 2022.

Its partnership with Northern Ireland’s fastest-growing supermarket goes back to 2012 when it started supplying stems to its growing regional store base. Since establishing in 2002, producing just 250,000 stems, the company has grown its operations to this year supply more than four million stems to the retailer.

Conor Boyle, Regional Director of Lidl Northern Ireland, said:  “Our supplier partnerships and our focus on supporting local companies to share in our success delivers real quality and value for customers, businesses and the economy. We’re thrilled to extend our deal with all the team at Greenisland Flowers and to support them in securing new routes to the market in the Republic of Ireland with a quality product which celebrates real home-grown success.”

By the end of 2021, Lidl Northern Ireland will have invested more than £7.2 million with Greenisland Flowers keeping its customers fragrantly supplied right throughout the year and supporting the creation of 14 new local jobs.

“At Lidl, we strive to supply our customers with market-leading, locally-produced products and for us Greenisland Flowers is a cut above the rest. Other supermarket retailers often import from areas of Europe, such as the Netherlands, but local suppliers have shown us that they can compete just as well”, Conor Boyle added.

Lidl Northern Ireland is a major supporter of local food suppliers. Last year, it commissioned an independent report into the economic impact of its operations which indicated that it spends at least £290 million annually with suppliers across the region while also supporting 3,500 jobs. This also confirmed that the Armagh, Banbridge and Craigavon area, Mid Ulster, Mid and East Antrim and Fermanagh benefited most from the lion’s share of its annual agri-food spend.

“Greenisland Flowers started out back in 2002 as a father and son partnership, with only a work bench, a pair of secateurs and a passion for growing beautiful flowers. Since then, we’ve transformed our business into a multi-acre, multi-site operation, producing millions of stems annually and continually innovating with new product lines and expanded ranges.

Our partnership with Lidl Northern Ireland has been transformative and it is thanks to their support that we have dramatically expanded our facilities, increased our production volume and provided additional employment.

We’re delighted that Lidl has remained a consistent partner to us over the years – even supporting us through the Covid-19 pandemic to ensure a continued revenue stream and by avoiding stock spoiling and wastage of blooms. It’s been wonderful to work with a like-minded company that is focused not only on its people and its partners, but in taking care of our environment and placing sustainability at its core.

In addition to cultivating 13 acres of flower field, Greenisland Flowers also operates Derrylard Nurseries on the shores of Lough Neagh where it grows a range of seasonal vegetables for market and retail distribution including lettuce which it also distributes to Lidl Northern Ireland. With a focus on environmental impact, both sites operate at a zero carbon and carbon neutral capacity

Qualified horticulturalist Shane, who runs the business with father Seamus, added: “This new contract with Lidl Northern Ireland marks a significant next chapter for Greenisland Flowers and will enable us to meet our future business objectives. For us, that includes investing further in our sites to ensure maximum efficiency and branching out into further diversifying our product range with additional flower varieties and new fruit and vegetable lines.”