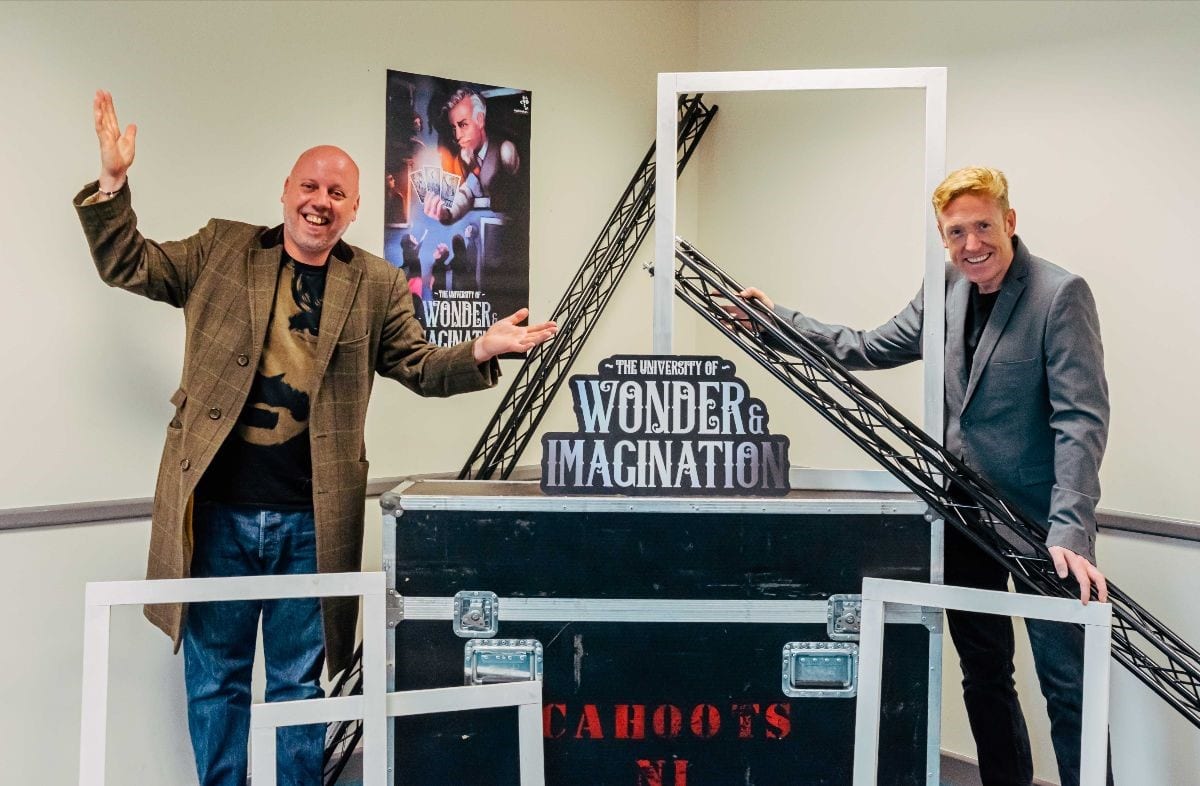 Northern Ireland-based children’s theatre company Cahoots NI has launched University of Wonder and Imagination, an immersive digital theatre experience with the aim of bringing the magic and joy of theatre to young audiences at home.

The University of Wonder and Imagination is an hour-long interactive digital theatre production that allows audiences to effectively direct the performance, based on their interaction with the performers. In this ambitious and innovative undertaking, Cahoots NI will broadcast from an extensive, purpose-built set in Belfast, where magic and illusion have no boundaries.

The show will have it’s Northern Ireland premiere as part of this year’s Belfast International Arts Festival running from October 22nd – 25th and 29th – November 1.

Limited to pre-booked audience numbers per performance, guests will assemble with their fellow University students and, led by the mysterious Professor Bamberg, will embark on a journey where nothing is quite what it seems.

Audiences will interact with lively lecturers, experience themed rooms filled with illusion and encounter problems and puzzles in an attempt to unlock magical powers and graduate with flying colours.

“Now, more than ever, we want to capture the sheer joy and wonder that theatre and live performance brings young audiences, something we so desperately miss being able to provide at this time. We have worked hard to create an experience that would act as a first step to bridge the gap between young people and live theatre that can be enjoyed at home.

“Developing this production has allowed us to explore a completely new channel through which to bring magic and illusion to children and their families via digital technology. The choices our audiences make live, during the event, will shape their unique theatre experience – and that’s hugely exciting for us.

“The technology we are using for the production is intricate, but it will be seamlessly blended with physical sets and magical illusions. Our audiences haven’t seen anything like this from Cahoots NI before, and we believe it will be a fun-filled, thrilling experience for children, for their families and for our cast and crew to be a part of.”

The University of Wonder and Imagination is supported by the Arts Council of Northern Ireland.

Caoileann Curry-Thompson, Arts Development Oﬃcer for Drama and Dance, Arts Council of Northern Ireland, said: “Despite the enormous challenges presented to the Arts as a result of the Covid-19 pandemic, Cahoots NI continues to offer audiences world-class children’s theatre with their latest show, The University of Wonder and Imagination, this Autumn.

“With their trademark ingenuity and wizardry the Cahoots team are managing to bring the essence of stage magic and theatrical spectacle to life through new technologies. Cahoots’ work is not only multi award-winning and internationally acclaimed, but also a firm favourite with family audiences at home and abroad.

“This latest show promises to be a wonder to behold! The Arts Council of Northern Ireland is hugely proud to support this terrific production which will be enjoyed by many online, helping to bring great art to everyone.”

Cahoots NI is at the forefront of Northern Irish theatre and is the leading professional theatre company producing work for children. Since beginning operations in 2001, Cahoots NI has produced original, critically acclaimed work for children including Under the Hawthorn Tree, Secrets of Space, Shh! We have a Plan and has toured its work internationally including in China and the USA.