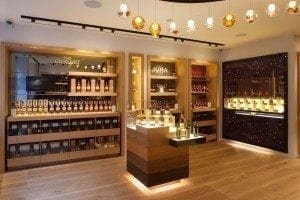 Portview Fit-out is ‘top of the world’ after proving its international credentials once again by being shortlisted for two prestigious UK and Global retail awards.

The Belfast-based company, which works for many of the world’s top brands has been chosen as one of four finalists in the Contractor of the Year category of The Global RLI Awards 2014 and has been shortlisted in two categories within the UK’s Association of Interior Specialists (AIS) Awards.

The nominations confirm Portview Fit-out’s standing as an international player in the competitive retail and leisure sectors.

The shortlist for the Global RLI Awards includes some of the world’s top retail names and most talked-about international retail projects from places as diverse as Saudi Arabia, Dubai, China, Turkey, Czech Republic, Seychelles, UK and Portugal. Portview is the only company from Northern Ireland to feature on the shortlist.  The winners of the Global RLI Awards will be revealed at a glittering ceremony at the Natural History Museum, London on June 5.

Meanwhile the Belfast firm has also reached the finals of two AIS categories for its exceptional work at leading drinks emporium, The Whisky Shop, London and Mermaid Maternity Retreat, also in London, which provides luxurious, five-star accommodation for mums and mums-to-be. Winners of the AIS Awards will be announced at the AIS President’s Lunch on June 10.

Portview Fit-out took the Retail prize in the NAS Design Partnership Awards in 2013 for The Whisky Shop in London and the Leisure Award for its role in the Knightsbridge-based Montreux Jazz Café.