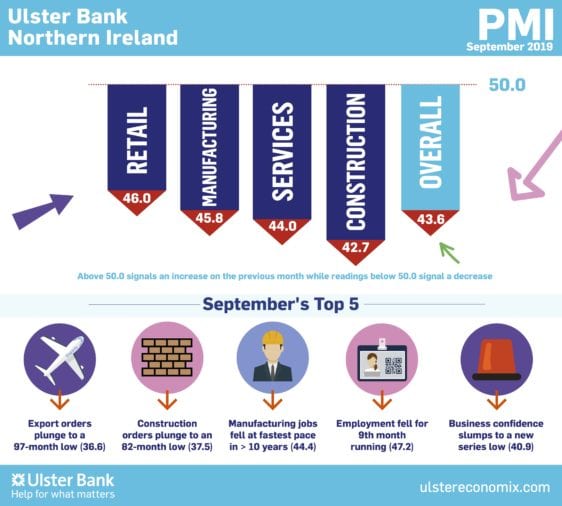 Commenting on the latest survey findings, Richard Ramsey, Chief Economist Northern Ireland, Ulster Bank, said: “Deteriorating business conditions was a key theme across the UK and further afield in September, and Northern Ireland was no exception. The latest Ulster Bank NI PMI shows that the pace of decline in output, new orders, employment, exports and expectations all accelerated last month relative to August. Notably, export orders at local firms fell to a 97-month low, which underscores that this is not just a Northern Ireland problem, and that global demand is weakening.

“However, within the UK, the deterioration in private sector activity has been most marked in Northern Ireland. It is the seventh consecutive month that private sector output has fallen here, and the fifth month that all sectors have been in decline.

“Perhaps most notably, construction saw the fastest rates of decline in output, and new orders in the sector are now at an 82-month low. The manufacturing sector also reported its fastest pace of job losses in over 10 years. But the weakness is broad-based, and the largest sector, services, had a particularly difficult month in September with output and orders hitting 81-month lows.

“Looking ahead, Northern Ireland is the only UK region where firms expect output to be lower in 12-months’ time. This reflects the lack of confidence in the local private sector at present resulting from a range of factors, not least ongoing Brexit uncertainty. However, whilst a week is a long time in politics, a year is a very long time in economics, and much can change quickly on both fronts.”

The headline seasonally adjusted Business Activity Index posted 43.6 in September, down from 45.4 in August and the lowest since November 2012. Output has now fallen in seven successive months, with the latest reduction in Northern Ireland the strongest of the 12 UK regions covered by the survey. Panellists mainly linked falling activity to Brexit uncertainty, with customers reportedly reluctant to commit to new projects at present. Lower output was recorded across all four monitored sectors, led by construction.

New orders decreased for the eighth successive month, and at a substantial pace that was the fastest since May 2012. As well as affecting domestic demand, Brexit uncertainty also impacted negatively on new export orders. New business from abroad declined to the greatest extent in just over eight years.

Given the drop off in new orders, companies in Northern Ireland were able to work through backlogs of work again in September. Meanwhile, companies continued to scale back employment levels given declining workloads. Panellists reported that workforce numbers had been lowered through the non-replacement of leavers. The rate of job cuts was solid, and the fastest since April.

Sterling weakness and higher staff costs were the main factors leading input prices to rise in September. The rate of inflation eased from that seen in August, but remained marked. The pace at which firms in Northern Ireland raised their own selling prices was unchanged in September. Business confidence slumped to the lowest since data on sentiment were added to the survey in March 2017. Brexit was the main factor pulling down confidence, with Northern Ireland again the only area of the UK to predict a fall in output over the coming year.