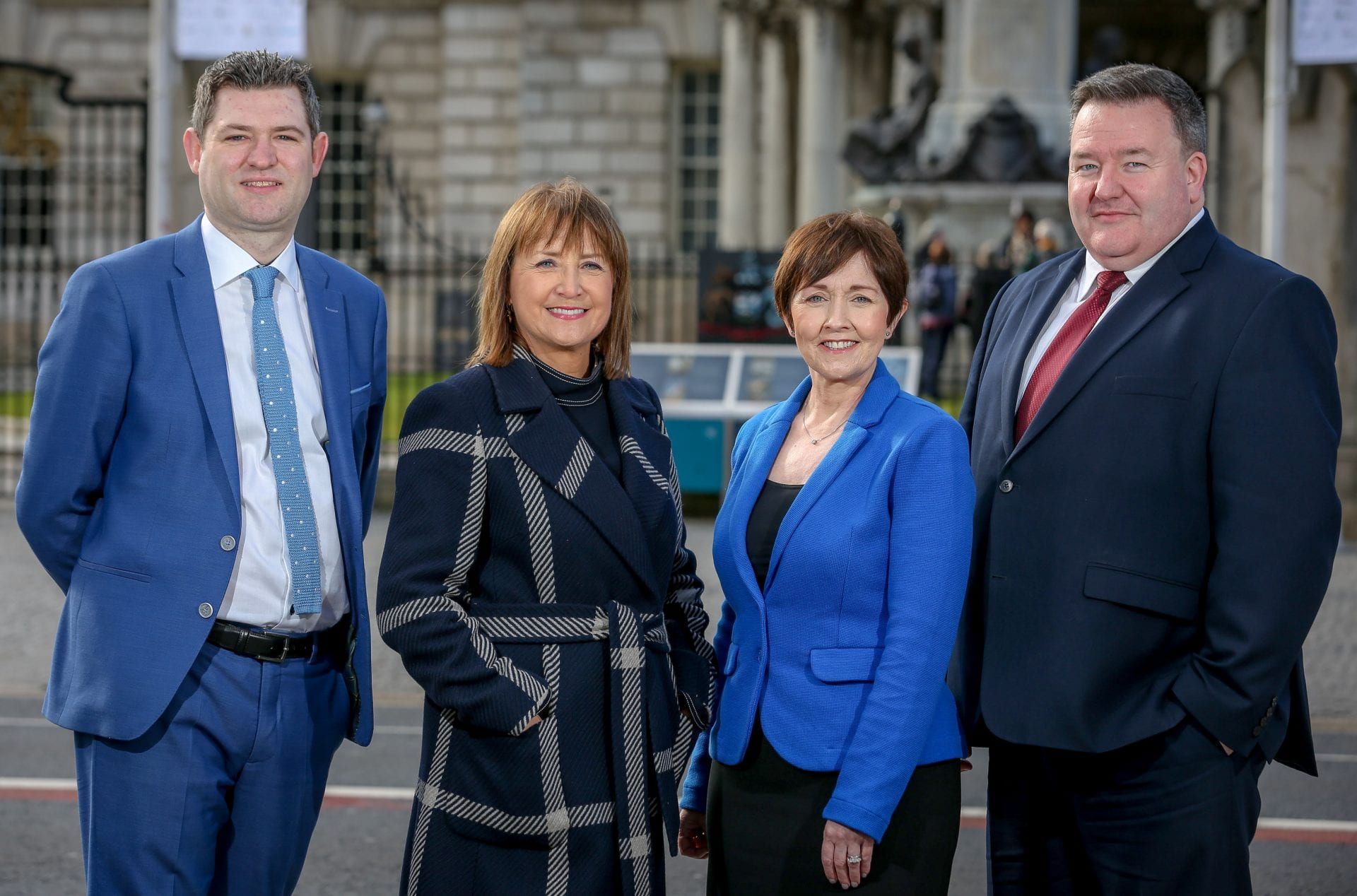 The latest Quarterly Economic Survey published today (10 April 2019) by Northern Ireland Chamber of Commerce and Industry (NI Chamber) and business advisers BDO reveals that key forward looking indicators for the region’s economic health have weakened in the first quarter of 2019.

The survey reveals that whilst businesses are trying to grow sales, exports and jobs, they are becoming less confident around prospects for turnover and profitability in the next 12 months. Investment intentions among members are also falling.

The business organisation’s Brexit watch also shows that more members are making tangible preparations to leave the EU. Some 29% of members surveyed have either established or are considering establishing a presence outside the UK. Around 12% have already changed recruitment plans and 10% have refocused their target markets.

Three in 5 members (60%) believe that Brexit is negatively impacting on the ability to attract skilled workers to Northern Ireland with skills mismatch also a key business concern.  Just under half of firms believe that their business is currently experiencing a gap in the skills needed to grow their business. This is having a serious impact on the business performance of 20% of businesses affected and some impact on a further 43%. 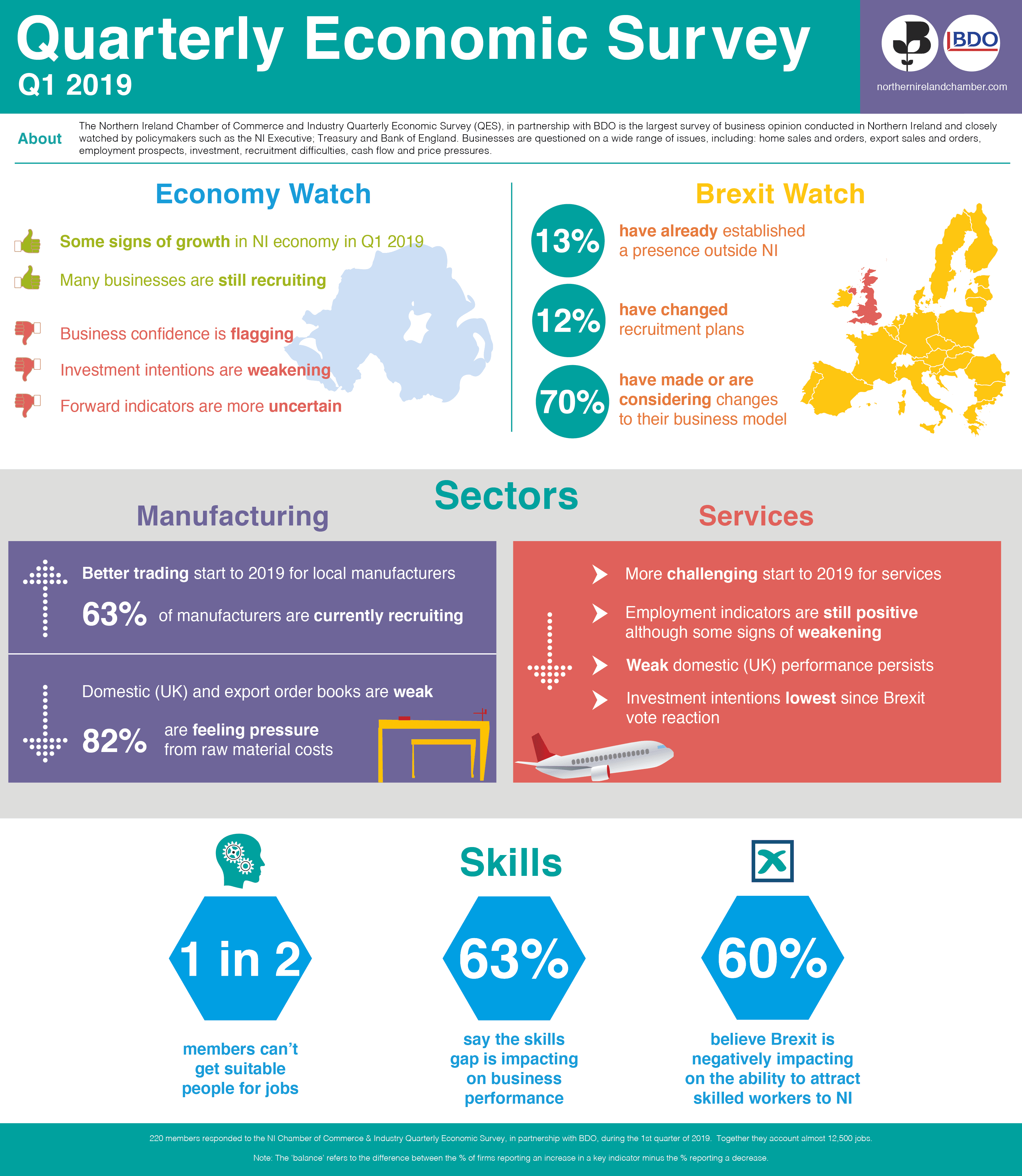 The survey, which covers the Q1 2019 period, reveals that there are still signs of growth in the Northern Ireland economy overall, with positive job indicators and UK and export sales balances.

Local manufacturers faced a better trading start to 2019 after a fairly muted end to 2018 – although confidence and investment intentions were less positive. Most key balances are positive (11 of the 14), suggesting some growth, with employment balances being one of the most positive indicators for the sector in Q1. However order books remain weak for both domestic and exports orders and high raw materials cost pressures persist with 82% citing this as a key driver of cost increases. Manufacturers are also contending with growing pressure from employees around pay settlements.

The services sector faced a slow start to 2019 with a particularly weak domestic performance. The sector is still showing some signs of growth. There are some positive signs around jobs with employment expectations for the next 3 months and the share of business trying to recruit both above the UK average (although there are signs of falling recruitment intentions). The export sales balance has continued to improve. However, the weak domestic (UK) performance persists with a negative balance around sales in next 3 months. Investment intentions are negative around capital and lowest since the initial reaction after the Brexit vote took place.

Business confidence is falling with Brexit’s negative impact evident. Although the balance of businesses expecting turnover to rise over the next 12 months remains positive, this has been falling in recent quarters. Much of the gains in business confidence in both sectors post-recession is increasingly being eroded. Confidence around profitability is particularly weak in both sectors.

Exchange rates are a key concern for 52% of members and has remained a significant issue as sterling’s weakness persists. This figure was just 19% before the Brexit vote took place. Competition is more of a concern for 36% of members in Q1 19. Inflationary pressures continue to ease.

Businesses continue to recruit with 63% of manufacturers and 53% of service sector firms trying to hire people in the last 3 months. However recruitment difficulties have been a persistent and growing issue for members. Around 77% of service sector firms and 74% of manufacturers are currently having difficulty recruiting suitable staff, largely skilled manual and professional/managerial staff. Three in 5 members (60%) believe that Brexit is negatively impacting on the ability to attract skilled workers to Northern Ireland.

Just under half of members believe that their business is currently experiencing a skills gap (a gap between the skills required for the business and the actual skills its employees possess). This is having a serious impact on the business performance of 20% of businesses affected and some impact on a further 43. Just over half (51%) believe that there is a serious mismatch between the skills people have and actual job requirements which is severely hampering business and economic growth here.  In addition, 35% of members believe that employees in Northern Ireland are over-qualified for the job they are doing.

The NI Chamber and BDO quarterly Brexit Watch highlighted that a growing core of businesses are preparing in some way for Brexit.  Some 29% of members have either established or are considering establishing a presence outside the UK, up from just 7% in Q2 2017.  Around 12% have already changed recruitment plans and 10% have refocused their target markets. The survey highlights that around 30% of members have no plans to make any changes because of Brexit.

Responding to the NI Chamber & BDO Quarterly Economic Survey, Ann McGregor, Chief Executive of NI Chamber, said: “The damaging impact of Brexit is becoming increasingly apparent as Northern Ireland businesses face continued uncertainty around its outcome. Investment intentions are weakening further and businesses are telling us that they are setting up or thinking of setting up/relocating outside Northern Ireland.

“Our findings should serve as a clear warning that the ongoing impasse at Westminster is contributing to a sharp slowdown in the real economy right across all of the UK regions. These are some of the weakest figures we’ve seen in nearly a decade, and that’s no coincidence. Business is certainly hitting the brakes.

“In fact, much of the gains in business confidence in both sectors post-recession are increasingly being eroded by the Brexit-related uncertainty. The UK government must ensure that a messy and disorderly exit is avoided and provide firms with certainty on future conditions to prevent further declines.”

She concluded: “This is also not helped by the ongoing political stalemate at Stormont which is also holding back economic progress in Northern Ireland – as illustrated in the survey by the recruitment challenges and skills gaps facing firms. Our politicians must urgently find a way of working together on economic and social matters.”

Brian Murphy, Managing Partner at BDO, said: “Business owners can’t be faulted for experiencing a decline in confidence, not in this market. But even with the endless barrage of votes and debates and a general lack of political progress, businesses have persevered and performed well.  Just think what we could achieve if all of our stakeholders were aligned. That is my hope for Northern Ireland in the very near future.

“That said and unfortunately so, uncertainty continues to be the theme for local businesses as we conclude the first quarter of 2019. Decisions on investment, recruitment and restructuring are being put on hold due to a lack of progress around a range of issues, namely Brexit, recruitment, skills, competition and rates.

“Our initial post-recession confidence has decreased and there is a real need for clarity and progress to allow industries to get this confidence back, which will in turn ultimately allow for business growth.

“The commitment to invest and recruit is evident within both industries even under difficult circumstances. What these businesses need is support and clarity around the major issues to allow them to develop and be competitive in the domestic and global marketplace.”