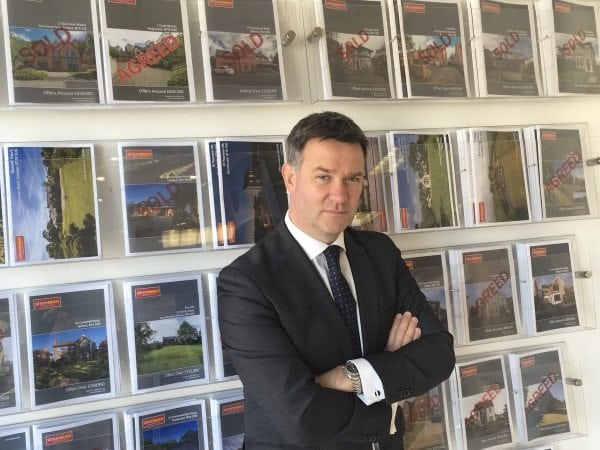 Northern Ireland house prices edged upwards again, according to the RICS (Royal Institution of Chartered Surveyors) and Ulster Bank Northern Ireland Residential Market Survey for May, but a slowdown in the market continues to be evident.

After a strong period of price growth in recent years, the uncertainty in the wider political and economic environment now appears to be catching up with the local market and impacting on activity and confidence in the short-term.

Prices are rising at a slower rate according to the latest report and the net balances for surveyors’ expectations regarding prices and sales activity are negative.

Surveyors are also reporting that new buyer enquiries and new instructions to sell were lower in May.

Anecdotally, surveyors noted that ongoing political and economic uncertainty in Northern Ireland were contributing factors in the latest results.

Surveyors though are more optimistic in the longer-term, with 12-month expectations for prices still positive. A net balance of +35 percent of respondents expect prices to be higher in 12-months’ time.

Ciaran Donnelly, FRICS, of Campbell Cairns in Belfast said that political uncertainty and the approaching holiday period were impacting on the market.

Samuel Dickey, RICS Residential Property Spokesman in Northern Ireland, said: “We have seen the housing market perform strongly in recent years in terms of price rises and activity, but there now appears to be significant variation in the market, with some surveyors reporting lower demand and lower levels of price rises in some areas. My own experience is that there continues to be strong demand in places like North Down, Belfast, and Ards.

“Demand for new build homes continues to be a real feature of the market in these areas too,” he adds.

Terry Robb, Head of Personal Banking at Ulster Bank, said: “The summer period tends to be more subdued in terms of sales, as people embark upon summer holidays and a potential move is not as high on their agenda. We have however witnessed the ongoing strength in first-time buyer demand for mortgages and we expect mortgage activity remain strong into the second half of the year, particularly in the self-build and co-ownership segments.”

The main findings of the house prices survey

The balance of respondents reporting an increase in house prices over the last three months has eased back, taking Northern Ireland from having the highest rate in the UK to fourth place. The net balance now stands at +12%.

Expectations for short-term prices over the next three months have fallen once more, to a net balance of -17%.

The net balance of new buyer enquiries and new instructions over the last month both remain in negative territory, at -7% and -24% respectively. As a result, sales in the last month were perceived to be low at -6% and the forecast for the coming three months remains tentative at -27%.

12-month expectations remain positive but continue to be increasingly cautious. The net balance for forecast sales in the year ahead are at +5% (from +13% in April), and the balance of those expecting further increases in prices is +37% (from +54% last month).