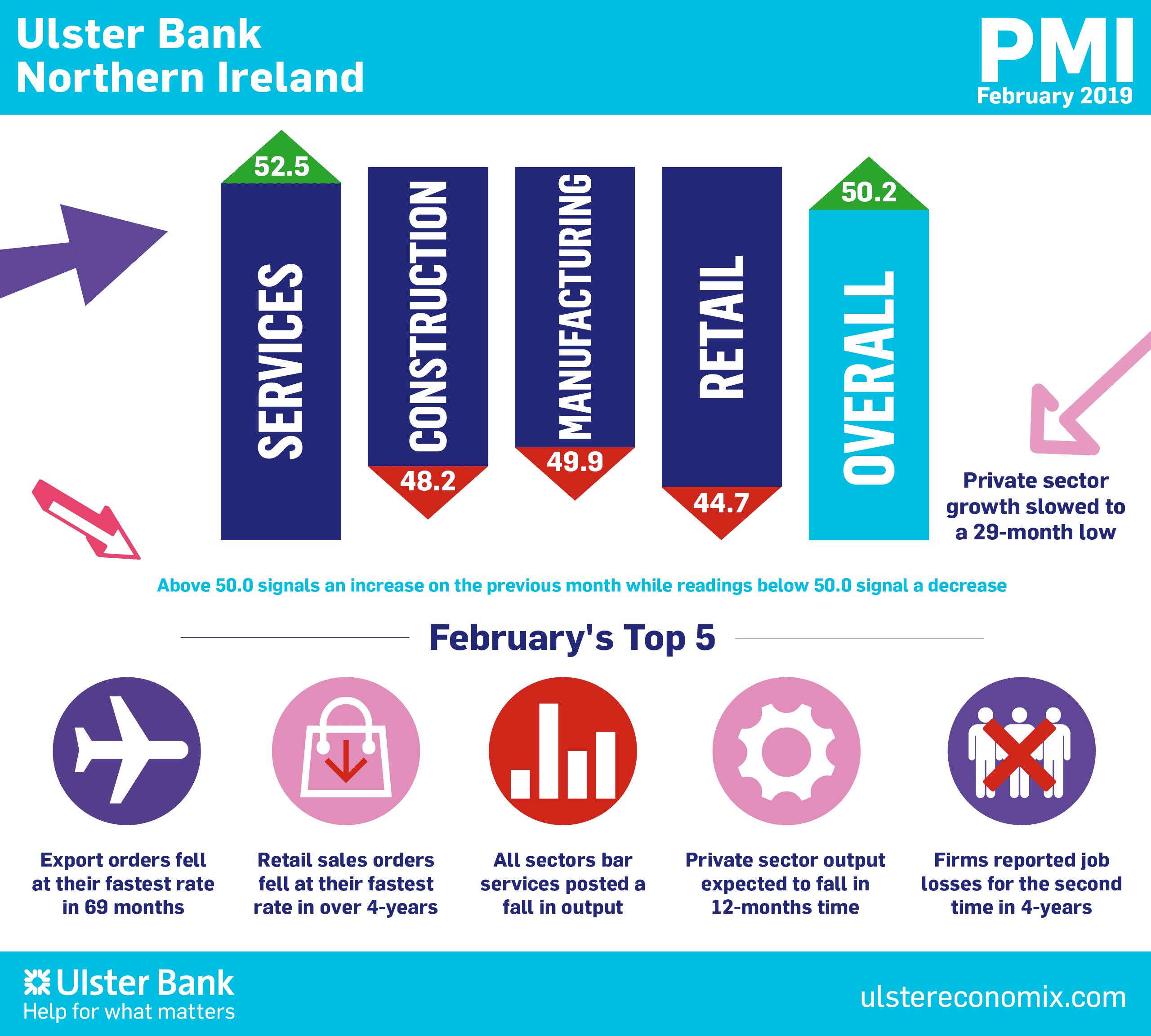 Commenting on the latest survey findings, Richard Ramsey, Chief Economist Northern Ireland, Ulster Bank, said: “February’s PMI marked the final survey before the Brexit withdrawal date, and last month was perhaps the point of peak uncertainty and fear regarding a potential ‘no-deal exit’ from the EU. This uncertainty is very much reflected in the latest report.

“In terms of output, private sector growth eased to a 29-month-low, with services being the only sector to remain in expansion mode. Manufacturing output stagnated but both construction and retail saw rapid rates of decline.

“In relation to employment, Northern Ireland was one of nine UK regions to experience a fall in February, driven by the services sector which had until January seen almost two-and-a-half years of growth. But the one area where Northern Ireland stands out against the rest of the UK is confidence in the year ahead. Northern Ireland is the only UK region where firms expect business output to be lower in 12-months’ time.

“Whilst Brexit uncertainty is clearly a factor in all of this, it should be remembered that there are other factors at play, including the wider economic slowdown across Europe, concerns over global trade, and the ongoing restructuring of the retail sector.”

The headline seasonally adjusted Business Activity Index dropped to 50.2 in February from 51.6 in January. The latest reading signalled only a fractional monthly increase in private sector output, and one that was the weakest in the current 29-month sequence of growth. While some panellists saw output rise due to work on backlogs and as part of Brexit contingencies, others signalled that Brexit uncertainty had led to falls in activity.

Brexit uncertainty also had a negative impact on new orders during the month, with some customers holding off committing to new projects. As a result, new business decreased for the first time since October 2016. New export orders, meanwhile, decreased sharply, ending a 31-month sequence of growth. The rate of contraction was the fastest since May 2013.

Declining new orders led to another monthly reduction in backlogs of work in February. Moreover, the rate of depletion was the sharpest in four years. Companies lowered their staffing levels for the second successive month. That said, the rate of job cuts softened from January and was only marginal.

The rate of input cost inflation eased to a 19-month low in February, but remained marked amid reports of currency weakness and supplier price increases. Output prices also increased at a weaker pace midway through the first quarter. The latest rise in charges was the slowest since October 2016. Businesses were pessimistic regarding the 12-month outlook for output for the first time in the two-year series history. Negative sentiment generally reflected Brexit and associated uncertainty, which is expected to limit new order inflows.