Today sees the release of March data from the Ulster Bank Northern Ireland PMI(r). The latest report – produced for Ulster Bank by IHS Markit – suggested that Brexit uncertainty pushed the Northern Ireland private sector into decline. Business activity decreased for the first time since July 2016, while the rate of decline in new orders gathered pace. This was also the case with regards to employment, which decreased to the greatest extent in almost six years. 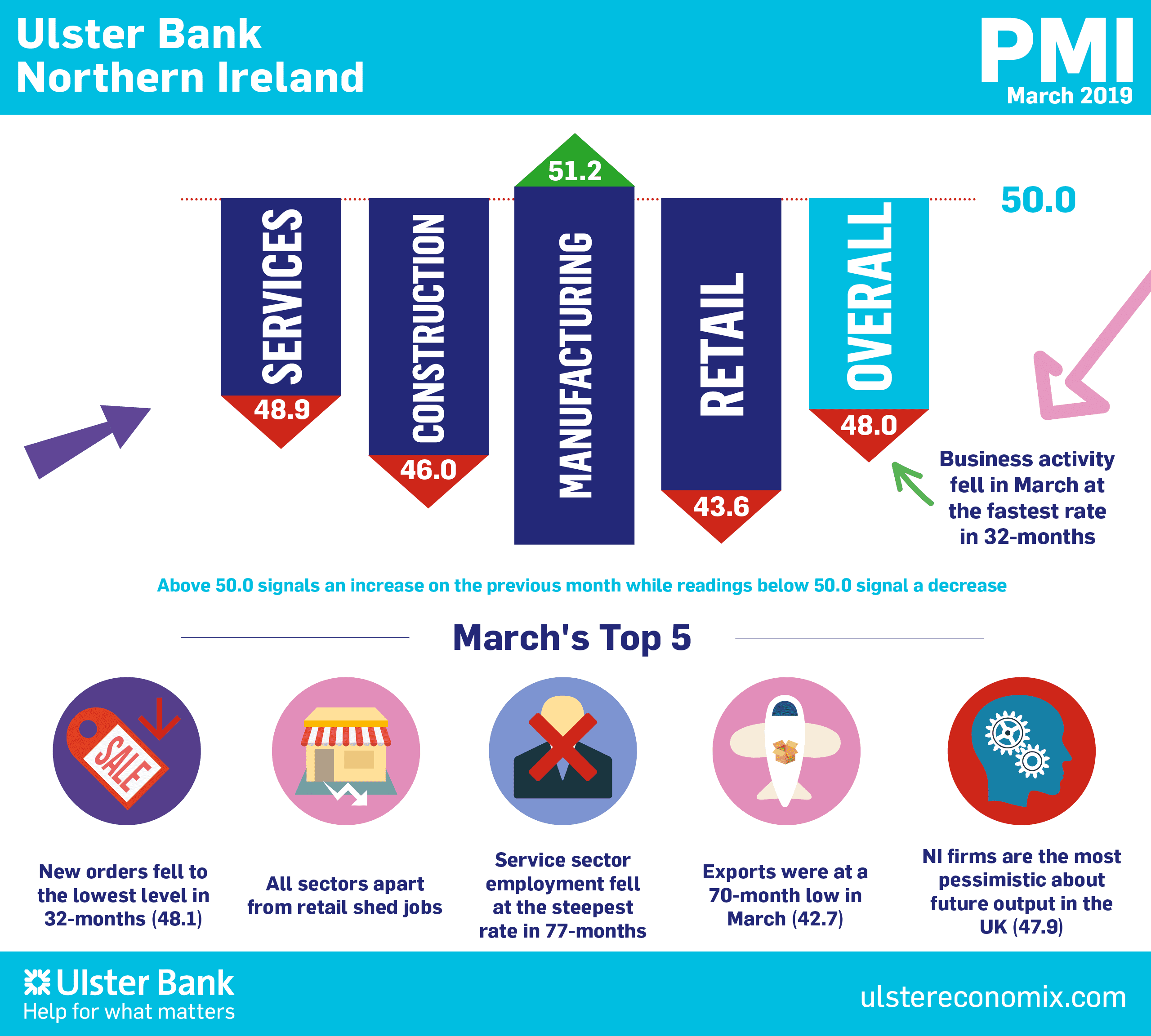 Commenting on the latest Ulster Bank Northern Ireland PMI findings, Richard Ramsey, Chief Economist Northern Ireland, Ulster Bank, said: “The term ‘Brexit uncertainty’ has been overused in the last couple of years, however it is again a major feature of the latest PMI, with the impact of this becoming more and more tangible. Business conditions deteriorated further according to respondents, with March seeing the first fall in business activity in 32-months.

“Perhaps more significantly though, export orders and employment levels both dropped at their fastest rate in almost six years, and Northern Ireland firms are increasingly pessimistic about the year ahead. Clearly the potential for a no-deal scenario was exercising the minds of business owners last month.

“Positives were in short supply in the latest survey with manufacturing continuing to be the only sector recording output growth; albeit that stockpiling was no doubt a factor. This is seen in the UK Manufacturing PMI, where stockpiling was reported to be rising at its fastest rate in 27 years. At the other end of the spectrum locally is retail, with sales activity declining at its sharpest rate in four years.

“Meanwhile, Northern Ireland’s largest sector, the service industry, took a turn for the worse in March, with output, orders and employment all going lower. Service sector activity hit a 32-month low and staffing levels in the sector are falling at the fastest rate in almost six-and-a-half years.

“Last month marked the end of the first quarter of the year, and the deteriorating picture in March meant that it was the weakest quarter in terms of output since Q3 2016. More significantly though, employment and exports had their worst quarter since the first half of 2013.

“However, Northern Ireland is not alone in this regard, with the UK as a whole also struggling on the growth front. Indeed this picture is consistent in Europe as well, where Germany for instance, is seeing manufacturing activity falling at a rapid rate. Northern Ireland though differs from the rest of the UK in that there has been a lack of decision-making on two fronts, with the absence of an Executive adding to the complications created by uncertainty over Brexit.

“This has driven a declining picture regarding confidence, with Northern Ireland respondents, particularly in the construction sector, the most pessimistic in the UK regarding future output. With the prospect of a no-deal Brexit receding and decisions in relation to some key infrastructure projects now being made in Northern Ireland, it remains to be seen whether some optimism returns in the months ahead.”

The headline seasonally adjusted Business Activity Index fell below the 50.0 no-change mark in March to signal a monthly reduction in output in the Northern Ireland private sector. The reading of 48.0 was down from 50.2 in February and brought an end to a 29-month sequence of expansion. The UK as a whole, meanwhile, saw no change in output at the end of the third quarter. Brexit uncertainty and an associated drop in new orders was reportedly behind the decline.

New orders fell for the second month running in March. Although modest, the rate of contraction quickened from that seen in February. Meanwhile, new export business decreased at a substantial pace that was the fastest since May 2013.

With new orders declining again, companies were able to work through outstanding business. Signs of spare capacity fed through to a scaling back of workforce numbers, as has been the case throughout 2019 so far. Furthermore, the rate of job cuts was solid, having quickened to the steepest since April 2013.

The rate of input cost inflation quickened slightly from the previous month, with higher staff costs widely mentioned. In contrast, the rate of output price inflation softened to a 32-month low as some firms lowered charges as part of efforts to attract new business. Business confidence sank further in March, with companies pessimistic regarding the 12-month outlook for activity for the second successive month. Brexit uncertainty and the possibility of a ‘no-deal’ scenario were behind pessimism.