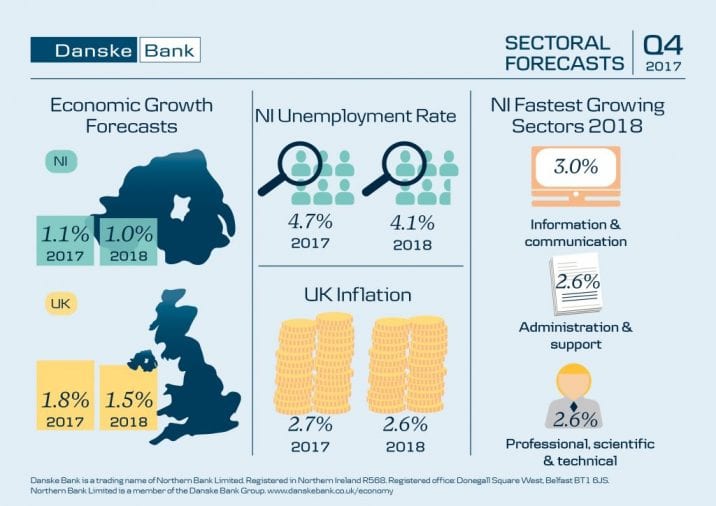 Brexit-related uncertainty and the lack of an Executive has created a climate that is holding back investment and lowering consumer confidence, according to a new report by Danske Bank.

Both of these factors are likely to contribute to economic growth in Northern Ireland remaining subdued.

Danske Bank said that nearly all sectors of the economy are expected to grow in the year ahead with the one exception being public administration and defence.

Conor Lambe, Danske Bank Economist, said: “Northern Ireland experienced sluggish growth in 2017, with the economy estimated to have grown by just 1.1 per cent.  Looking into the year ahead, we expect growth to remain subdued and are forecasting a marginal fall in the growth rate to 1.0 per cent in 2018.

“We expect inflation to fall gradually over the year ahead, but it is likely to remain above the Bank of England’s 2.0 per cent target and average 2.6 per cent over 2018. We think that household spending power will remain under pressure as increases in the rate of nominal wage growth are unlikely to be enough to push real wage growth well into positive territory.

“With Brexit-related uncertainty also likely to persist, we continue to expect some firms to postpone capital spending until the UK’s future trading relationship with the EU becomes clearer.”

Danske Bank is projecting growth of 1.5 per cent in the wholesale & retail trade sector in 2018. Declines in real wages and squeezed household spending are impacting growth in this sector and consumer spending growth is expected to remain weak over the forecast period, remaining below 1.0 per cent. Linked to this, growth is projected to slow in 2018 in the other consumer-focused sectors, namely accommodation & food services and arts, entertainment & recreation.

The expected growth rate for the manufacturing sector has been revised down marginally to 0.9 per cent in 2017, with growth expected to be similar in 2018.

Danske Bank has revised its expectation for growth in the construction sector up to 1.9 per cent in 2017. However, growth is forecast to moderate over the next twelve months with an expansion of 0.9 per cent projected in 2018.

The number of employee jobs in 2017 is estimated to have grown by 1.4 per cent, equivalent to an increase of around 10,600 jobs compared to the average employment figure for 2016. However, Danske Bank expects to see a slight slowdown in job creation in the fourth quarter of 2017 compared to the previous two quarters. This slowdown in jobs growth is forecast to continue into 2018, ultimately leading to a decline in employment in the final quarter of the year, with growth averaging just 0.3 per cent throughout the whole year.

A number of risks and uncertainties could affect the forecasts, including continued political uncertainty in Northern Ireland and Brexit.

Mr Lambe added: “The current lack of devolved government means that Northern Ireland is under-represented when it comes to engaging with the UK Government on Brexit and, without the devolved institutions in operation, local policymakers are somewhat restricted in their ability to help shape the future arrangements that will exist at the border with the Republic of Ireland.

“On Brexit, the months and years ahead will bring a new set of challenges, including securing a future trade deal, managing the UK’s borders, devising a new approach to migration and replacing the plethora of other economic and non-economic arrangements that currently exist between the UK and the EU. However, focusing on the shorter-term, we are hopeful that a multi-year transition period will be agreed in the first half of 2018.”