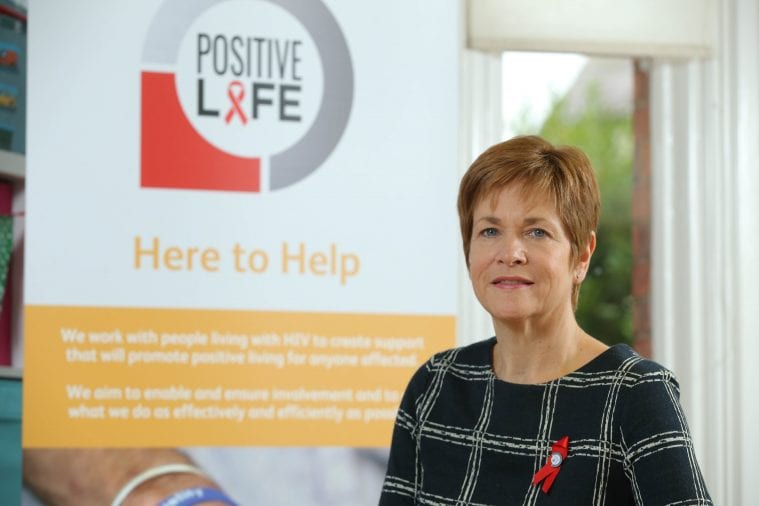 The head of Positive Life Northern Ireland’s only dedicated HIV charity is expected to warn that more must be done to combat the myths around HIV to help women take control of their sexual health at an event to mark International Women’s Day on Friday 8 March.

Jacquie Richardson (pictured), the chief executive of Positive Life, is expected to say that the perception of HIV as only affecting certain sections of the community is just one of the harmful myths that still exists in Northern Ireland and that it is having a negative impact on women’s sexual health.

In her remarks, she is expected to call for greater openness, more honesty and better education around sex and sexual health. She will also warn that misinformation and stigma leaves many women living with HIV in Northern Ireland excluded from society.

While HIV predominantly affects men who have sex with men, the HIV Surveillance Report 2018 showed approximately 20% of those who accessed care for HIV in 2017 in NI were women. Positive Life has previously documented the prejudice, negative attitudes and abuse that both men and women living with HIV in Northern Ireland face.

Positive Life is Northern Ireland’s only dedicated HIV charity. It supports and promotes positive living for people with and affected by HIV. Positive Life offers one-to-one support for people with HIV and their families, HIV testing, complementary therapies, a confidential helpline and peer support.

Chief Executive of Positive Life, Jacquie Richardson said: “I’m looking forward to talking at this event about the importance of women taking control of their sexual health and combatting the stigma that prevents us from talking about these important issues.”

“It’s true that HIV primarily affects men who have sex with men but it’s important to remember that it can affect anyone, we help men and women and the people who use our services come from every walk of life and every background.”

“International Women’s Day is a good time to talk about the need for women to be able to take control of their own sexual health and what we can all do to support that.”

“We need open and honest conversations around sex and sexual health, and we need comprehensive sex education to ensure that everyone has the ability to take care of themselves.”

Clare Bailey MLA said: “On International Women’s Day the Alternative Ms Ulster event returns to Parliament Buildings in Stormont, a fantastic opportunity to showcase the issues that matter to women in Northern Ireland and to highlight the excellent work being done to empower women across Northern Ireland, including the promotion of good sexual health.”

“The theme for this year’s event is “Women Rise Up” and taking ownership of our sexual health is a great example of women rising up to deal with an issue that is incredibly important.”

“Good relationship and sexuality education is key to good sexual health and essential to empower women. Women need the right education, the right tools and for all of us to combat the attitude around sex and sexual health that makes it difficult for people here to discuss those issues. This means it’s also vitally important that we work together to combat the stigma that those living with HIV in NI face every day.”