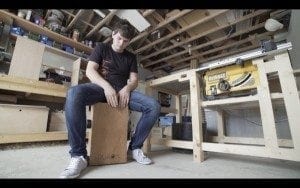 A young inventor and musician from County Down has teamed up with experts at Queen’s University to help bring the ancient sounds of Peru to life in Northern Ireland.

Back in 2011 as a 16-year-old, Stephen Henderson from Kilkeel began making cajons – also known as “a drumkit in a box” – for friends and family.

With the rise in popularity of the instrument – driven by artists like Mumford & Sons and Boyce Avenue – Stephen, now 19, decided to set up his own firm, Ruach Music, and manufacture the instruments on a bigger scale. Already Stephen has manufactured and sold over 400 instruments with plans to massively upscale his output via a Kickstarter campaign which runs up to August 21.

Thought to have originated in Peru in the 16th Century, the cajon is a wooden drum that a percussionist can sit on, playing the front face with their hands. There are snare wires, or strings placed inside that give it its distinctive sound.

The instrument, as well as being prominent in the modern acoustic scene, is also popular as an accompaniment to Flamenco dancing and can often be seen being played on the streets and in the bars of southern Spain.

However Stephen has decided to give his own take on the product.

“Percussionists voiced their frustrations with the traditional six-sided, wooden cajon, as they found it hard to create a consistent tone,” he said.

“I set about designing a style of cajon that would enhance the instrument both musically and aesthetically.”

After building and selling his initial prototypes, Stephen worked with Queen’s University, Belfast and with engineers throughout Northern Ireland to design his second range, the LIVE Series, which is now ready for launch.

“A lot of cajons on the market are known to go out of tune, are limited to only one or two sounds, cannot be altered during a performance at all, or can even fail when retuning,” he said.

“This is frustrating for musicians as their performance can be ruined as a result.

“Our patented new design allows the musician to choose between five sounds that lock into position, and also contains an internal bass pedal which allows the user to be more creative with their music.

“There are also detachable handles for ease of transport, all incorporated into an aluminium internal frame for maximum strength.”

Stephen has now launched the new product on the online funding platform Kickstarter, adding: “It is our hope that crowd-funding will help us springboard this product to success.”

Any potential funders can click the Kickstarter campaign at http://kck.st/WxSbnH