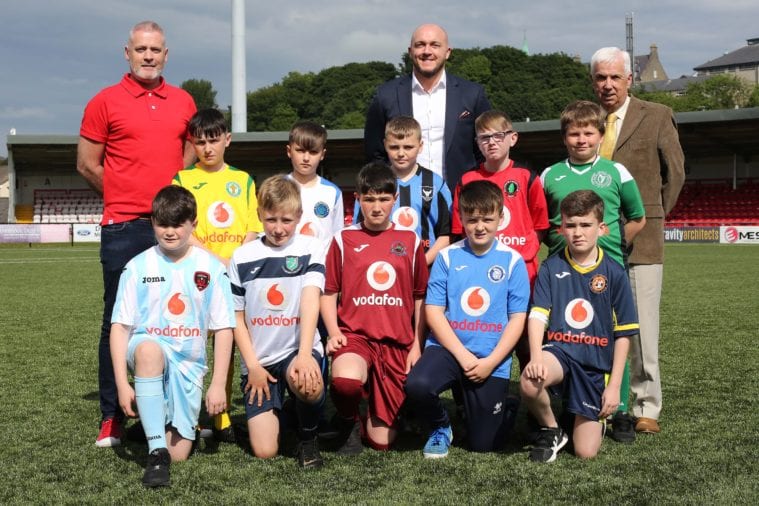 14 teams in the ‘under 12’ age group of the Derry & District Youth Football Association league have a major new kit sponsor in Vodafone UK.

Run by volunteers, Derry & District Youth Association support young football enthusiasts from across the region.  The Association now includes more than 80 teams with players ages ranging from nine to 16.

Pictured are a number of the teams together with (from left to right) Kevin McFeely, Retail Store Manager for Vodafone Bangor, Danny Kelly, Vodafone UK’s Head of Northern Ireland and Michael Hutton, Chairman for Derry and District Youth.

Michael Hutton Chairman from Derry & District Youth Football Association said “We are delighted that Vodafone have put so much faith in our local football teams and kids by sponsoring a kit for each team in the under 12 age category. It is very much appreciated by the coaches and kids and to be honest it is very much in keeping with the quality of service provided by Vodafone, locally, nationally and internationally.”

Danny Kelly, Vodafone UK’s Head of Northern Ireland said “Football has been bringing people together for generations. Vodafone has a proud heritage in helping local communities through our work with the Vodafone Foundation and local initiatives.  We’re delighted to be part of the Derry & District Youth team and wish them all good luck with the new season.”