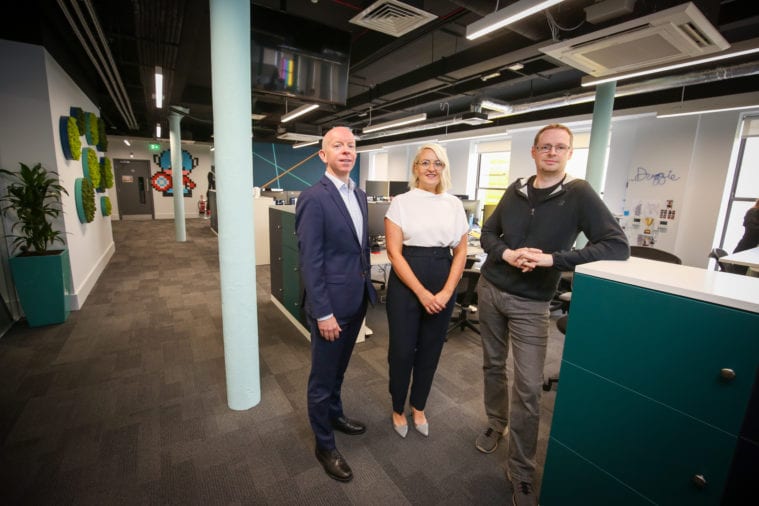 An international tech firm headquartered in the United States has invested further in its Belfast base having opened its new city centre offices. Bazaarvoice has taken 10,000 sq ft of Grade A office accommodation at McAuley House in Belfast city centre.

Commercial property agency CBRE acted on behalf of Bazaarvoice to acquire the space.

David Wright, Office Agency Director at CBRE, commented: “Bazaarvoice wanted to acquire space that supported how the company operates globally by maximising the connectivity between its people.

“This meant providing high-end, flexible office accommodation that incorporates many different breakout zones, as well as areas for both formal and spontaneous meetings.

“Innovative companies, like Bazaarvoice, demand more efficient and collaborative working spaces to attract and retain stellar talent, which is exactly what this property offers.”

Stephen Donnelly, Senior Software Development Manager at Bazaarvoice, said: “When we sought to grow the Bazaarvoice footprint, opening operations in Belfast was a natural choice.

“The city offers an extremely attractive investment proposition for FDI for many reasons, but none more so than the talent pool.

“There is a huge wealth of burgeoning talent and a thriving tech scene here and we are delighted with the quality of the indigenous workforce we have assembled.”

CBRE’s Building Consultancy team in Belfast, which was established last year, was also appointed by Bazaarvoice to project monitor its proposed fit-out of its new office accommodation.

Fiona Martyn, Associate Director at CBRE, said: “Through communicating with the team in Austin, Texas, it was clear from the offset that Bazaarvoice had a vision of creating a modern, innovative working environment for its Belfast staff.

“Our brief included bright open spaces that encouraged collaboration, high-acoustic performances in meeting rooms, and the inclusion of a nursing room and comfortable chill out areas.

“We were within weeks of completion when the historic Bank Buildings fire occurred, leaving significant programme challenges as the building was left as part of the restricted access zone in the vicinity.

“We worked closely with Bazaarvoice, the landlord and the design team to split the office move into two phases until we regained full access to the entire office suite.”