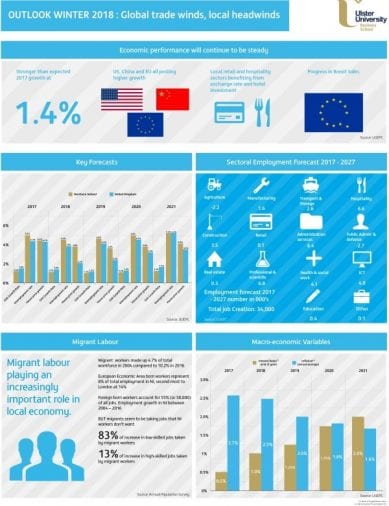 The Ulster University Economic Policy Centre (UUEPC) believes that economic performance will continue to be steady in the next few years.  The current outlook is set against the context of stronger than expected 2017 growth, which is now estimated at 1.4%.  This is forecast to fall to 1.1% in 2019 before picking up thereafter.

Mr Gareth Hetherington, Director of the UUEPC, was speaking at the publication of the Centre’s Winter 2018 economic outlook.

Mr. Hetherington said, “For the first time in several years the three engines of global economic growth, the US, China and the EU are all posting higher growth at the same time.  This is providing some relief to both the UK and Northern Ireland economies as increased exports are going some way to offset the squeeze in consumer spending.

Locally, the retail and hospitality sectors are also enjoying the benefit of a more competitive exchange rate and we are currently witnessing a significant increase in investment in the hotels sector.

However, this optimistic picture should not eclipse the challenges locally in terms of the absence of the Assembly, slowing job growth and squeezed incomes.”

Migrant labour is playing an increasingly important role in the Northern Ireland economy, rising from just 4.7% of the total workforce in 2004 to 10.2% in 2016.  Although Northern Ireland remains one of the lowest migrant dependent regions in the UK.

Mr Hetherington said, “Migrants have been key to supplying Northern Ireland businesses and organisations with labour over the last 10 to 15 years with foreign born workers accounting for over half, 55%, of all employment growth between 2004 and 2016.

“Therefore if the number of in-bound migrants falls significantly, local employers will be faced with a number of options.  Either encourage more local people back into the labour market possibly through higher wages, increase levels of investment in labour saving technology, or move to other jurisdictions with easier access to foreign labour.”

Mr Hetherington said, “A significant rise in the number of those identified as long-term sick is a key reason for the increase in overall economic inactivity.  The latest data indicates that long-term sickness benefits increased by approximately 15,000 people between 2016 and 2017, which is broadly equivalent to the reduction unemployment.

In a labour market where job growth is slowing, this suggests a flow of people from unemployment into economic inactivity.  This in turn indicates that current unemployment programmes to move claimants back into employment are failing a significant number of people.”

Will machines take our jobs?

The replacement of workers with machines, is often viewed in very binary terms, it is either potentially catastrophic or it is the route to sustained economic growth.  Employees are naturally concerned about losing their jobs, but similarly, automation holds out the potential for higher quality goods and services and generates new jobs in the development and operation of these new technologies.

Mr Hetherington said, “Fears about automation are not new.  William Lee was refused a patent for his knitting machine in 1589 because of fears it would create mass unemployment and in 1930 the economist John Maynard Keynes forecast that technological progress would result in a 15 hour week by 2030.  Ironically, Keynes was more concerned about how the population would fill the additional leisure time.

There has been a significant body of research undertaken on the impact of automation suggesting a wide range of outcomes, but one consistent point made is that any jobs lost are likely to be matched by new jobs created.

The UUEPC, with its sponsor Catalyst Inc. reviewed the potential impact of automation on the Northern Ireland labour market and have estimated that approximately 250,000 jobs could be impacted by 2030.

Importantly, jobs impacted does not necessarily mean jobs lost.  Individual tasks associated with a specific job could be automated rather than the entire job itself being replaced.  This should provide the employee with more time for higher value added activities, hence improving productivity, and therefore is less likely to cause mass redundancies as technology is embraced.

However one point that is clear, developing the skills profile of the current workforce will be critical as job roles evolve due to technology”.