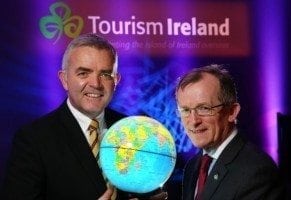 Tourism Ireland has launched details of its marketing plans to promote Northern Ireland overseas in 2016, at an event attended by Enterprise, Trade and Investment Minister, Jonathan Bell and tourism industry leaders from around Northern Ireland.

Speaking at the launch of Tourism Ireland’s 2016 Marketing Plans launch, Enterprise, Trade and Investment Minister, Jonathan Bell said: “Building on this year’s success and sustaining growth into the future is at the heart of Tourism Ireland’s strategy for 2016. Positive factors contributing to building on our 2015 tourism success include new flights to Northern Ireland and stronger economies in key source markets. I also welcome the opportunity to showcase a new updated advert highlighting our latest tourism experience – The Gobbins Cliff Path. The new ad will launch in January 2016 in 23 markets around the world, reaching 26 million potential holidaymakers in France and Germany alone.

“Tourism Ireland will continue to promote major Northern Ireland themes and attractions around the world next year – including the Causeway Coastal Route, Titanic Belfast, the Giant’s Causeway, our National Trust properties and our world-class golf offering. In 2016 we will also be inviting people from across the world to come here and enjoy a year of culinary celebrations for the ‘Northern Ireland Year of Food and Drink’ giving them the opportunity to  discover some of the best dining and hospitality on offer.

“Latest estimates indicate that, by 2015 year end, 1.9 million people will have visited Northern Ireland in 2015, representing a +5% increase over 2014. Revenue generated by international visitors is expected to be approximately £454 million, a +2% increase over the previous year. While I believe we should celebrate this success we must now set our sights higher on even bigger targets to ensure our tourist industry reaches its full potential.

“I know Tourism Ireland will continue to build on this success and in particular its Game of Thrones campaign in the spring. They will also continue to raise awareness of Northern Ireland as a top class business tourism destination, particularly highlighting the new facilities at the Waterfront Hall.”

Niall Gibbons, CEO of Tourism Ireland, said: “2015 is set to be a very good year for overseas tourism to Northern Ireland. Throughout the year, Tourism Ireland undertook a packed programme of promotions, to bring Northern Ireland to the attention of travellers everywhere. Thousands of opportunities were created for potential visitors around the world to read, hear or watch positive messages about Northern Ireland; Tourism Ireland estimates that this media exposure is worth an estimated £90 million in equivalent advertising value.”

Commenting on the year ahead, Niall Gibbons said: “Following a successful 2015, ambitious targets have been set again for 2016 and beyond. Next year, we will place a major focus on Northern Ireland’s Year of Food and Drink, inviting people who love great food to come and enjoy a wonderful culinary celebration – where they will discover the best of local produce and have the chance to experience the spectacular scenery and wonderful coastline which makes Northern Ireland so special. We will highlight The Gobbins Cliff Path around the world, while continuing to place a major focus on other iconic experiences like Titanic Belfast, the Giant’s Causeway and our unique National Trust properties. We will continue to target people of Ulster-Scots descent; and to promote Northern Ireland as a top golf and business tourism destination.”