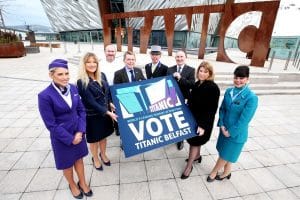 Cast your vote now and put your landmark on the map and make Titanic Belfast the WORLD’s leading tourist attraction.

Already Europe’s official Leading Tourist Attraction, Northern Ireland’s Titanic Belfast is one of just eight global finalists in the shortlist to win the world title – but clinching the prestigious title still rests on the number of online votes cast.

To help put Northern Ireland in the top spot, Titanic Belfast is urging everyone to vote via www.titanicbelfast.com/vote for the city’s iconic visitor attraction and conquer Rio, Abu Dhabi and Nevada, which are among only five other global leaders, to put Belfast and Northern Ireland first.

“Voting has officially opened but closes in less than two weeks, leaving little time to put Northern Ireland at the top of the world. In less than a minute, you can help ensure that we are the envy of the world with a global title few countries much bigger than ours can only dream of,” Judith Owens, Deputy Chief Executive and Director of Operations of Titanic Belfast, said. “Thanks to huge public support, we are up there with the world’s best, but just one more push will make us officially number one. With direct online action, together we can realise a dream few would have ever thought possible.

“To make it a reality, please log on now and make your voice heard by voting for Titanic Belfast. You can also help further by encouraging your family, friends or colleagues to get behind Northern Ireland and cast their vote for Titanic Belfast and by following and spreading the word using #VoteTitanicBelfast on Twitter and Facebook.”

Using innovative design, interpretation and technology, including CGI, film, audio and archival materials, Titanic Belfast’s nine galleries brings the story to life and takes visitors on a journey exploring the sights, sounds, smells and stories of Titanic, as well as the City and people which made her.

Critically-acclaimed and award-winning, more than three million people from around the world have already visited since opening in 2012, underpinning Belfast and Northern Ireland’s growing credentials as an unrivalled visitor destination, supporting thousands of jobs and a thriving hospitality sector.

Voted Europe’s leading visitor attraction at the World Travel Awards in 2016 – beating the Eiffel Tower, Acropolis and the Colosseum – the Guardian has described Titanic Belfast as “an inspiring testament to the Titanic and the city that built it”.