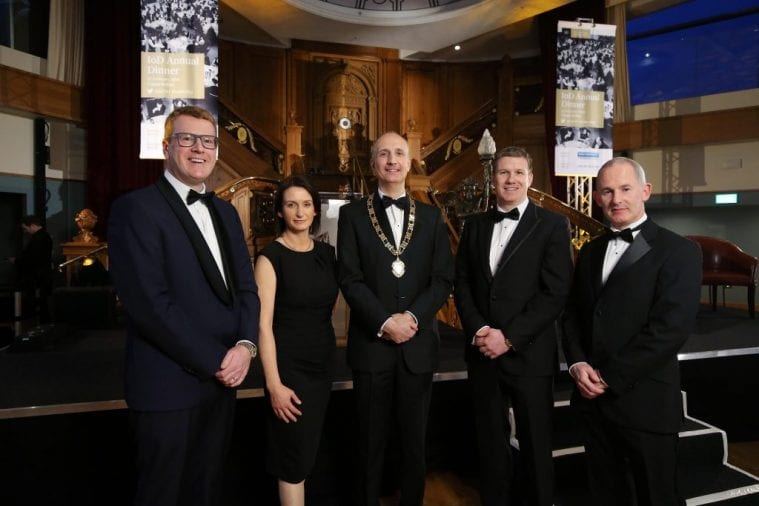 Northern Ireland risks alienating a generation of young people, disillusioned by the ongoing political impasse and several recent announcements of major job losses, which have amounted to more than 1,000 since the start of the year.

That was the message at the Institute of Directors Northern Ireland (IoD NI) Annual Dinner attended by more than 450 business leaders at Titanic Belfast.

During his address, Ian said: “I genuinely believe that the current political impasse risks alienating a generation of young people who want to be part of a bright future for Northern Ireland. Otherwise these highly mobile young people will increasingly look beyond Northern Ireland to fulfil their full potential.

“Given our focus on good governance, it is hard not to be pessimistic that 12 months on and with no marked progress towards resumption of the Executive, there is the very real danger that we are sleepwalking our way into alternative governance structures, which, at a critical time for Northern Ireland risks seriously diminishing our ability to realise our future ambitions.

“The fact that critical decisions regarding all of our futures are being postponed cannot be allowed to continue, and so I am using this occasion to reflect the deep felt views of our members and am making a direct appeal to our political leaders to re double their efforts to restore the decision making institutions in Northern Ireland so that we can get ahead with building and shaping our future together.

“Despite the challenges, local business leaders continue to demonstrate strong leadership, to grow their businesses and to create employment but we need our political leaders to seize the initiative and deliver on the mandate they were elected to discharge.”

Stephen, who has lead the IoD since the beginning of 2017, joined the organisation following a successful career in the private sector, most recently as CEO of English-based building firm Clugston Group

Mark oversaw major growth at Edinburgh-based airline ticket search engine Skyscanner, During his time at the firm, from which he has now moved on, staff numbers increased from 100 to more than 600 while revenues jumped almost 50% in 2016 to more than £90m.

“Bank of Ireland is a long-standing supporter of the work of the IoD and we are very happy to help create this opportunity for businesses in Northern Ireland to come together.”

Catriona Gibson, Managing Partner of Arthur Cox, commented: “This year’s IoD Annual Dinner once again provided an ideal platform for leading members of the business community to join together and hear the insights of the guest speakers.

“Through providing advice to many of Northern Ireland’s largest firms across all sectors, we have an in-depth knowledge of the exceptional talent that exists throughout our leading companies.

“We are delighted to support the IoD as it seeks to highlight the importance of retaining this talent in order to continue raising standards across the local economy.”