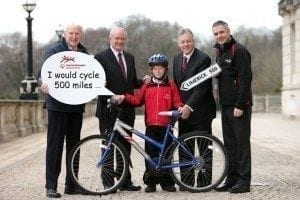 First Minister Peter D Robinson MLA and deputy First Minister, Martin McGuinness MLA have shown their support to hundreds of local athletes that are preparing to compete at this year’s Special Olympics All-Ireland Games in Limerick.

To mark the official launch of Team Ulster, ministers, MLAs and NI Assembly staff will be joined by Special Olympics Ulster athletes, volunteers and supporters at Parliament Buildings on Monday 27th January to cycle, run and walk a cumulative 500 miles – representing the return journey Ulster athletes will make to the 2014 Special Olympics Limerick Games.

Participants taking part in Special Olympics Ulster’s ‘Stormont Challenge’ will have their choice of treadmill or exercise bike in Room 115 at Parliament Buildings – sponsored by the Office of the First Minister and Deputy First Minister (OFMDFM). The event will allow people to drop in throughout the day between 10am and 4pm to make their contribution to the overall mileage target of 500 miles.

Commenting on the initiative, the First Minister Peter Robinson said: “We are pleased to support Special Olympics Ulster, a valuable community organisation that provides year round sports training to people with intellectual disabilities, in the launch of Team Ulster for the 2014 Special Olympics Limerick Games. We wish the athletes and volunteers best wishes for their preparations and every success for the Games in June.”

The deputy First Minister Martin McGuinness added: “Our Special Olympics athletes are great ambassadors and we would encourage members of the public to get behind Team Ulster as they prepare for their journey to Limerick in June by showing their support in any way they can.”

The 2014 Special Olympics Limerick Games will take place over four days from Thursday 12 Juneto Sunday 15 June 2014. In what will be one of the largest and most prestigious sporting events to take place in Ireland this year, 1,500 Special Olympics athletes from throughout the island of Ireland will travel to Limerick. They will be accompanied by 500 coaches and official delegates as well as a contingent of over 3,000 family members. The Games will be supported by a team of 3,000 volunteers who will be recruited over the coming months.

Locally, the Special Olympics programme is delivered through sports charity, Special Olympics Ulster, supporting over 2,000 athletes with intellectual disabilities in 98 clubs throughout the region.

Commenting ahead of the launch of Team Ulster, Shaun Cassidy, regional director, Special Olympics Ulster said: “For many of our athletes in the Ulster region, the 2014 Limerick Games will be the first time they will have competed on a national level. Reaching this level of competition is a real achievement for our strong delegation of Ulster athletes.

“We would like to thank the First Minister and deputy First Minister for their valued support – our Stormont Challenge is poised to be a great launch event for Team Ulster as our athletes begin their journey to the Limerick Games, where they will represent Northern Ireland on a national stage.

“Members of the public wishing to support Team Ulster on the road to the 2014 Limerick Games can make a donation online at www.specialolympics.ie/ulster – every donation, however small, will make a huge difference to the lives of local athletes with intellectual disabilities.”