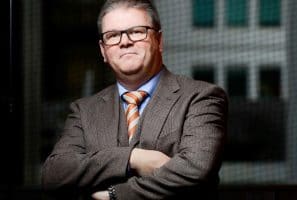 The awards are amongst the most competitive within the UK’s PR industry.

Judged by industry experts this year’s PRMoments attracted more than 800 entries from throughout Britain and Northern Ireland. Judges commended SERIOUS for its ‘genuinely fresh approach and outstanding results’.

In the past three years SERIOUS has had its work recognised in the form of a series of UK-wide and NI accolades including the UK Freshest Small Agency, the PRCA Dare Outstanding Small Consultancy for Scotland and NI and several CIPR PRide awards including runner up in the NI Outstanding PR Consultancy category.

And last week it was nominated for Outstanding Small Consultancy within the UK’s CIPR Excellence Awards, which are widely acknowledged as the Oscars of the UK PR industry.

SERIOUS founder and Managing Director, David McCavery said his agency’s success had once again set down an industry marker in the company of some of the brightest and best in Britain and Northern Ireland.

“To be nominated in the PRMoments awards was an honour in itself but to win against others much larger than ourselves provides proof positive that Northern Ireland agencies can compete with the best in Britain.

“Later this year we will celebrate our tenth anniversary. However, rather than resting on any laurels we’re determined to keep developing our agency by benchmarking ourselves against the best in the business.

“We are unapologetically small and specialist but big on ideas and client service. Our goal is to build a PR & Marketing agency with true stand-out in our market that is capable of supporting our clients in Northern Ireland, The Republic and Britain with equal ease. Currently a substantial proportion of our fees are delivered for Northern Ireland clients in Britain and we see this trend continuing.

“Furthermore, we have ambitious plans to broaden the range of support we bring to growth focussed clients so we can add even more value through every brief.”

SERIOUS is based in the heart of Belfast city. Its client portfolio comprises top consumer and corporate brands including Tesco, Cleaver Fulton Rankin, Kestrel Foods,  Acheson + Glover and McAvoy Group.