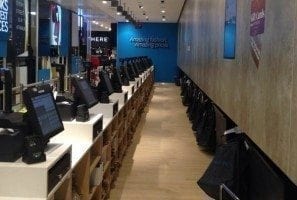 Premier Electrics is introducing a raft of new cloud-based services aimed at enabling it to compete with the best in Europe.

The Mid-Ulster based electrical installation company which works throughout the UK, Ireland and Europe for some of UK’s top retailers, has announced a major investment in technology and a number of new jobs which it believes will drive further growth for the business.

As well as its own dedicated 100MB superfast fibre-optic broadband connection Premier Electrics is installing a range of cloud-based Microsoft applications which will improve information flow between its team and its clients as well improving its project management capability and delivering a robust business continuity system.

With teams literally operating on a 24/7 basis the length and breadth of the UK and now increasingly in European countries including Germany, Holland, Austria, Belgium, Spain and Portugal remote access to information as part of a state-of-the-art communications infrastructure is vital.

Premier Electrics founder and Managing Director, Mark Scullion explains: “This investment will facilitate the sharing of crucial project-related information with our customers and professional partners and provide secure on-line storage for bulky documentation including complex drawings. Additionally the new system seamlessly connects all of our CRM, Project Management and Financial Administration information which will bring about significant improvements to the business overall.”

Premier’s team delivered a strong performance in 2013 and – thanks to its ongoing sales and marketing drive in the UK and Europe – expects turnover to grow by around 30% this year. One of the major contributing factors to the company’s growth was its maintenance division.

“We believe this is a strong performance against any benchmark and provides further evidence that the construction sector is slowly turning the corner, although we have yet to see any noticeable uplift in terms of new projects on the island of Ireland,” says Mr Scullion.

“Since the demise of one of our major contracting partners at the end of 2012 we have worked hard to successfully strike up new relationships which have generated some major contracts in Britain. We were also delighted to deliver our first jobs in Holland last year for Primark in Eindhoven and Zoetermeer.”

Premier’s team is currently engaged in delivering the electrical fit-outs of a number of high profile projects including Primark stores in Germany and Holland and a major new retail development in England.

Premier Electrics, an independently owned company, has worked extensively across Europe. Two years ago it opened an office in Germany to support its growing portfolio of European projects.

The award-winning local contractor, which marked 20 years in business last year, has worked for many of the top retail brands throughout the UK, Ireland and Europe.