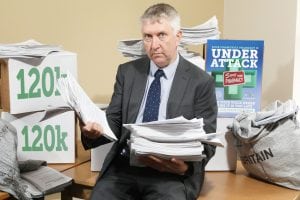 The public petition to save local community pharmacy in Northern Ireland has now hit over 120k signatures. The petition officially closed on(9th July with the exact figure reaching 120,112.

The representative body for community pharmacy in Northern Ireland has said that the Department of Health can no longer ignore the sheer volume of patients and organisations now involved in the campaign.

The petition which had 75,000 signatures around ten days ago has received a welcome boost as support from patients grows.

The jump in over 45,000 signatures has come about due to local pharmacists encouraging a final push before sending back their completed petitions to the central co-ordinating team at the Community Pharmacy NI headquarters in Belfast. (Over 4.6k signatures were captured online at Change.org which is incorporated into the final figure).

Community Pharmacists across Northern Ireland have taken the opportunity to engage and activate their regular patients to let them know exactly what the current crisis is about and how it could potentially impact on their healthcare provision.

The final petition push comes as the senior leadership from Community Pharmacy NI travelled to London last week to meet with the Northern Ireland Secretary of State to highlight prolonged Government underfunding, additional funding cuts made in 2017/18 and to explain why the current funding model which sees many medicines dispensed at a loss, is inappropriate.

Prior to the collapse of the Northern Ireland Assembly, the last Health Minister, Michelle O’Neill, outlined a commitment to continue to develop and resource community pharmacy-based initiatives over the next 10 years. However, this is now in jeopardy due to the fact that the Department of Health is under funding the cost of providing community pharmacy services by at least £20m.

This funding shortfall has been compounded in recent months by unprecedented generic medicines shortages leaving community pharmacists and their staff with a daily struggle to find many of the medicines needed by their patients. When they do source the items required, they can find themselves paying more than ten times the usual price, all without knowing if they will be fully reimbursed.

Gerard Greene, Chief Executive, Community Pharmacy NI (pictured) commented: “In the past few days we have been inundated with our members returning page after page of petition signatures. We are overwhelmed, but not entirely surprised, as this quantity of feedback clearly shows how important local pharmacy is to people.”

“Community Pharmacists are fighting for their future existence and have been activated to capture the support that we know is out there. Patients and patient groups have told us that they are extremely worried about this situation and are very concerned that some pharmacists are being forced to make tough decisions and how that might impact on their care.”

“We are truly grateful to the many tens of thousands of people who have called in to their local pharmacy or gone online to show their support. They need us, and we need to be there for them in terms of clinical and social support, now, and in the longer term.”

“Elected representatives, business leaders and patient representative organisations are standing with us. This huge public outpouring needs to be heard and recognised by the Department of Health. They can no longer keep their heads in the sand and hide behind the fact that there is no Assembly or Executive in place. They made the cuts in the first place and they have it within their gift to redress the funding issues and must do so urgently.”