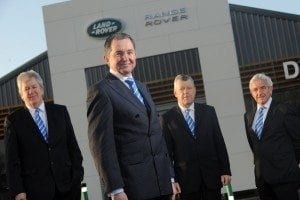 Paul Rooney, a former Partner at PwC, will take up his new role with immediate effect with the remit to implement a strategic review of the business.

The Donnelly Group, which incorporates Donnelly and Taggart/Donnelly Bros, employs 540 people across its seven sites. Representing 18 vehicles manufacturers the Group had a turnover over of £195 million last year.

Terence Donnelly is delighted to have secured the services of Mr Rooney who he sees as pivotal in developing the next stage of the Donnelly Group success story.

He said: “Since 1947, the Donnelly Group has been synonymous with the motoring industry in Northern Ireland. Over the last seven decades we have continually developed our offering whilst pushing the boundaries in customer excellence.

“I have known Paul Rooney for many years. He has a wealth of experience with a strong business acumen who will be an asset to the Donnelly Group.

“We look forward to working closely with Paul as we strategically map out the future of the Group to ensure future commercial success.”

Mr Rooney, who joined PwC in 1981, held many senior financial advisory positions within the company, providing counsel to banks, governments and private sector organisations. He is also a former Chairman of Business in the Community. He said: “The Donnelly Group is a family business that has grown to be a significant employer but also a significant economic driver for the region.

“I look forward to working with Terence, the other shareholders, directors and staff as we drive the Group forward whilst retaining its strong history and ethos in placing the customer central to its operations.”