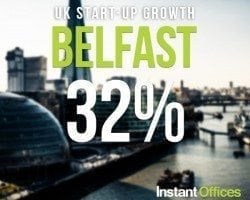 The number of new business start-ups has grown by 28% across the UK over the past year, according to an analysis of Companies House data by Instant Offices.

The increase in start-up businesses across the UK has been driven by the regional cities with Nottingham showing the highest concentration of new business registrations; 68% more companies were started in 2014/5 compared to the previous financial year in the city.

London experienced some of the smallest proportional growth across the UK at just 21% .

The increase in new companies appears to be particularly strong in the Midlands and North; cities in these areas increased proportionately faster than their southern counterparts, including the Capital.  Key areas for growth include Bristol, which grew by 40% and Birmingham which grew by 39% with Belfast at 32%.

Tim Rodber, CEO of Instant Offices says: “Demand for office space has been very strong in the regions for the past year but the aggressive growth of starts up in particular shows, in our view, a shift in the balance of the workforce and the way they are working.

“The UK’s contingent workforce – those freelancers, consultants, and one-man companies – are acting as sources of growth and innovation across the country and this is symbolized by the increased demand for flexible office space.  We can track this by the increase in demand for one to two desk requirements in offices across the country.  Nottingham, for example, saw a 37 per cent increase in new office enquiries from 2014 to 2015, obviously driven by these increases in start-ups.”

“Start-up growth and demand for offices has been driven by London since 2010 but now the balance has shifted to the regions where, perhaps, renewed confidence in the economy is seeing growth in entrepreneurialism.  I should be clear that London is, of course, the largest market for such growth, but the demand in smaller markets is remarkable and this is symbolized by growth in Nottingham, Leicester and similar sized cities.”