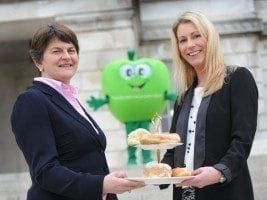 Northern Ireland’s biggest consumer food and drink event is set to become an annual fixture with the news that the Food & Drink Show NI is to be staged again this autumn at the King’s Hall Pavilion, Belfast.

Following the success of last year’s inaugural event, which attracted 10,000 visitors, this year’s Show will once again provide a platform for leading food and drink brands and artisan producers to promote and sell their products.

A programme of celebrity TV chef and local chef demonstrations will take place throughout the three day event, which will run from 24th – 26th October.

Enterprise, Trade and Investment Minister Arlene Foster said: “Food tells a positive story of Northern Ireland’s culture, heritage, people and landscape and is a vital part of the tourism experience.

“Visitors in particular enjoy finding Northern Irish food on menus with many choosing to dine in those places which serve distinctive and authentic dishes based on fresh, local produce.

“I greatly welcome the return of the Food & Drink Show NI, supported by the Northern Ireland Tourist Board, because it provides local businesses with a fantastic opportunity to showcase great quality produce, much of which has now become popular in international markets.”

Show Director Judith Brannigan said this year’s show will build on the success of the 2013 event, which attracted massive trade and consumer interest.

“The Food and Drink Show NI is unique as the only show in Northern Ireland with a targeted consumer audience,” said Judith. “It provides businesses that sell quality food, drink and related lifestyle products to the domestic consumer – retail, directly or online – with an unrivalled opportunity to get in front of their end users.

“We were staggered by the response to last year’s show and the 2014 event promises more exhibitors, more activities and more to see and do. We are also delighted that Moy Park is coming on board again as sponsor of one of the key events, the Celebrity Chef Theatre.”

This year’s celebrity chefs will be announced shortly. In 2013, the headliners included crowd-pleasers James Martin and baking guru Paul Hollywood.

The 2014 show will also include an Open Kitchen stage area for demonstrations by local chefs and food and wine experts, an Artisan Village featuring specialist NI producers and exhibitors showcasing the latest food, drink and kitchen living products.

Information on how to exhibit at the Show can be found at www.foodanddrinkni.com