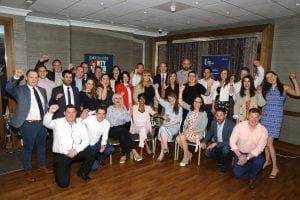 The 2018 Northern Ireland 40 under 40 List met for the annual Networking Lunch at the Malone Lodge Hotel in Belfast.

Sponsored by MB McGrady Chartered Accountants, 4c Executive and Ulster University Business School, and in association with the Institute of Directors in Northern Ireland, the lunch gave the successful Listers an opportunity to Network and connect with old and new friends.

Congratulating the successful Listers, Business First Online Managing Editor Gavin Walker said, “You should be proud of achieving your place on this year’s Northern Ireland 40 under 40 List. We had almost 100 nominees for the List and the judges worked long and hard to select the final 40.

“Each of the judges brought a particular interest to the process and chose those they felt had just that little extra to offer.

“One of the successful 2017 Listers recently wrote that they felt that their inclusion on last year’s List counted heavily toward their recent successful career move, so the value of your achievement can indeed be measured.

“I would like to thank Conaill McGrady (MB McGrady), Gordon Carson (4c Executive) Michael McQuillan (Ulster University Business School) and Dr Elaine O’Neill from the IoD for their time and diligence as judges.”

Each of the Northern Ireland 40 under 40 List will be profiled individually on Business First Online over the next four months. You can follow them on Twitter #ni40under40

The Charity for the day was the Northern Ireland Air Ambulance

For the first time this year the Awards included a special People’s Award which encouraged public voting.

With almost 9,000 votes cast, the three amazing winners were: The Judges were keen to recognise the leadership shown by the young people from Kinship care who were entered into the  40 under 40 Awards by Jacqueline Williamson. Kinship Care is an award winning charity that helps and supports kinship carers and their children in Northern Ireland. A representative group travelled from Derry/Londonderry to receive the Award which will sit beside so many others already won.