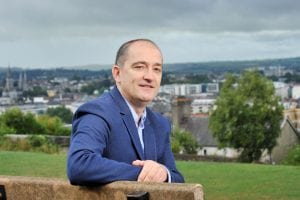 A no-deal Brexit is becoming more likely and threatens to knock Ireland back into recession in 2019, according to Dr Declan Jordan, Director of the Spatial and Regional Economics Research Centre, UCC – the organiser of what will be the biggest conference ever held in Cork City.

“We are just seven months from Brexit, and there is little evidence that the UK government has the political will or ability to agree on a deal with the EU. This leaves the Irish economy in a precarious position” said Dr Jordan.

“The focus in Ireland on Brexit has been on the backstop agreement to prevent a hard border. There is far more at stake, however,” Jordan added.

“The latest research shows that, among EU partners, only Irish regions are as exposed as UK regions to a no-deal Brexit. If the UK government continues with the nonsensical approach that the EU needs the UK as much as the UK needs the EU and seriously considers walking away with no deal, the Irish economy will be the major innocent casualty.”

UCC will host the Congress of the European Regional Science Association (ERSA) from August 28 to 31, which is set to attract more than 800 delegates and generate €1.4 million for the city.

Previously hosted in cities including Vienna, Lisbon and St Petersburg, the 58th edition of the annual Congress in Cork will feature cutting-edge research on regional and urban development from across the globe and generate more than 3000 bednights for the city.

Professor Patrick O’Shea, President of UCC, will welcome delegates — 95% of whom will be international visitors — including participants from the OECD, the European Commission and the European Investment Bank, at the opening ceremony at UCC’s Devere Hall on August 28.

Having estimated the exposure of European regions to Brexit, their analysis found that “only regions in Ireland face exposure levels similar to some UK regions” and the Republic of Ireland’s national level of Brexit trade‐related risk exposure is over 10% of GDP.

The analysis of this project shows that the regional impacts in the UK and the rest of the EU are substantial. Their research for the UK finds that “Brexit will aggravate, not reduce, interregional imbalances. Local government officials in London and the south-east are less pessimistic about Brexit than those in other regions, and our research suggests that this is justified.

Second, the fact that many of the Leave-voting regions are also likely to face the most severe post-Brexit challenges also means that in the long run there is expected to be a profound mismatch between public expectations and economic outcomes”.

Professor Edgar Morgenroth of DCU will present a paper on the potential regional impact of Brexit in Ireland.

Professor Andres Rodriguez-Pose of the London School of Economics has focused recently on the role of spatial inequality in explaining the rise of populism, from Trump to Brexit to the right-wing European movements, which he called “the revenge of the places that don’t matter.”

“The revenge of the places that don’t matter – reflected in the rapid rise of populism – represents a serious and real challenge to the current economic and political systems.”

According to Rodriguez-Pose, “regional economic divergence has become a threat to economic progress, social cohesion, and political stability in Europe” and this has been the little-considered factor driving recent political upheaval.

Dr Kristin Hermansson of the University of Glasgow has a paper on ‘Destination sorting and return migration of young Syrian refugees,’ based on a survey of young refugees in the UK, Greece and Lebanon in 2017.

There is a clear sorting on observed ability, with the most qualified refugees being in the UK and least so in Lebanon. The converse is observed for stated re-migration intentions, with refugees in Lebanon most intent on returning to Syria and those in the UK least intent on doing so, while the refugee population in Greece aspires to re-settle in another European country.

From the point of view of European policy discourse, these results indicate that it is unrealistic to assume Syrian refugees will be temporary visitors in Europe and policies should aim for their long-term integration. A key priority should be identifying the best fit between refugee capabilities and aspirations on the one hand and the needs and capacity of host regions on the other.

Giovanni Perucca of the Politecnico di Milano will discuss the negative effects of living in a large city on happiness. He argues that the effects of living in a city are different for different categories of city dweller. Professor Philip Morrison of Victoria University of Wellington will talk about how city-living raises the income and well-being returns to those with tertiary education while depressing the real income and well-being of the less qualified.