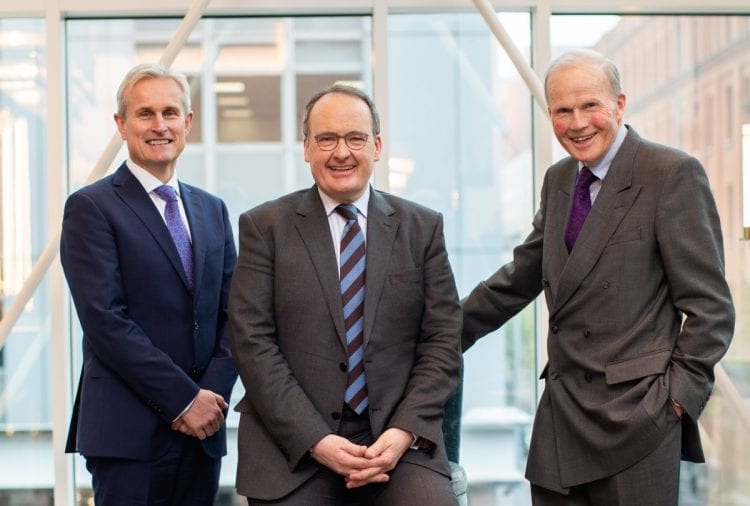 A new era beckons for Northern Ireland’s largest independent hotel group, Hastings Hotels, as its longest-serving employee steps into the role of Chairman after 47 years as Financial Director.

Edward Carson’s succession to Chairman will pave the way for the appointment of a new Financial Director for the group, with Belfast-headquartered executive search firm 4c Executive appointed to manage the search for the role.

Hastings Hotels is the largest independent hotel group in Northern Ireland, with seven luxurious properties across the province – including the newly-opened 300-bedroom Grand Central Hotel in Belfast. The family-owned company was established in 1966 by Sir William Hastings who, over 30 years, subsequently introduced all four of his children to the group in the roles of Managing Director, Sales Director, Marketing Director and Events Director.

Managing Director Dr Howard Hastings explained: “Having purchased the Stormont and Adair Arms Hotels in 1966, my father went on to acquire a group of six run-down railway hotels in 1971. Keen to grow and invest in the business at this time, he soon advertised for a Financial Director and appointed Edward Carson, who returned home to Belfast from London in 1972 to assume the role.

“Working closely with my father, Edward helped steer Hastings Hotels through some of the most tumultuous years in Northern Ireland’s history, which saw the Slieve Donard Hotel and a number of venues in the group bombed on several occasions.

“With ‘The Troubles’ at their height, few tourists dared venture to Northern Ireland and our business was driven not by bedrooms, but by what was then a lively entertainment scene – with 10 per cent of our sales even coming from cigarettes.”

Despite numerous setbacks and obstacles over the years, the group charted steady growth – but it didn’t happen overnight, according to Howard. “Hastings Hotels has got to where it is today through very gradual investment and evolvement over a sustained period of time,” he said.

“The evolution of IT has played a huge role in helping us to become much more sophisticated as a business, as has the decision to consolidate our reservations and business support services for all of the hotels into one centralised unit at our Head Office,1066 House.

“Now, at over 1000 bedrooms across Northern Ireland, we’re proud to be recognised and respected as a leading hotel group which is built on the warmth of its welcome and personal touch, combined with exacting international standards.

“None of this would have been possible without Edward’s leadership and stewardship,” continued Howard. “We are deeply indebted to him, both as a family and as a business, for his steadfast loyalty and dedication to Hastings Hotels over the past 47 years. I am confident we will continue to benefit from his excellent wisdom and guidance in the coming years as he takes on the role of Chairperson.

“But we also look forward to welcoming in a new era for the group with the appointment of a new Financial Director who, like Edward, will be instrumental in helping Hastings Hotels embrace the many challenges and opportunities that are sure to come our way in the future.”

Speaking about the Financial Director role at Hastings Hotels, Gordon Carson, Managing Director of 4c Executive said: “This is an exceptionally important role, fully-integrated into what is arguably one of Northern Ireland’s most successful and well-known businesses.

“With the group very much underpinned by a strong family ethos and people culture, the successful candidate must be able to forge strong and lasting relationships with hotel managers, HR and finance teams in the business, as well as external professional relationships.

“This is an extremely exciting opportunity for a high-calibre individual to help steer Hastings Hotels along its journey of continued investment and expansion in the coming years.”