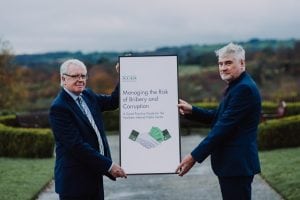 The Guide aims to help Northern Ireland public sector organisations and individual public officials identify how bribery and corruption may occur, highlight the key risk areas and provide advice on how the risks can be countered, both at an organisational and personal level.

Mr Donnelly said: “While the risk of bribery and corruption in Northern Ireland may be considered low, it is still present and should not be under-estimated. Complacency carries its own dangers; raising awareness is key.

“The nature of much of public sector business carries inherent risks. Functions such as procurement, planning, grant administration and regulatory functions are widely recognised as being open to the risk of bribery and corruption. This Guide provides advice on identifying and mitigating those risks.”

Mr Donnelly added: “It is essential that all public officials and elected representatives are aware of their responsibilities in countering the risk of bribery and corruption as they undertake their public duties and that all public sector employers embed the principles of this good practice within their organisations.”

The Guide was launched at a meeting of the Chief Executives’ Forum. It will be widely publicised throughout the Northern Ireland public sector and can be accessed via www.niauditoffice.gov.uk.