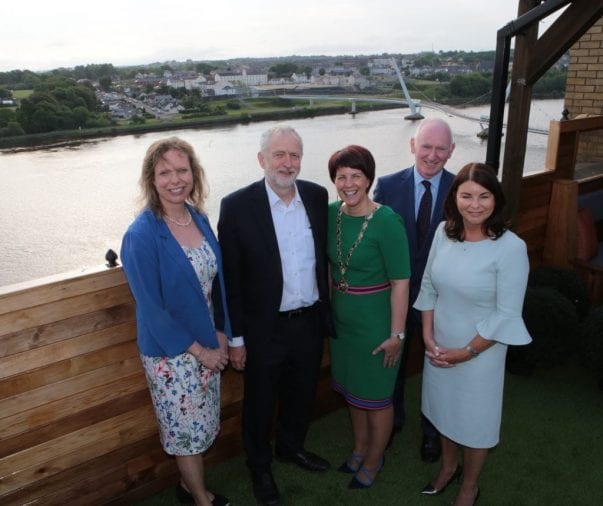 Londonderry Chamber of Commerce President Jennifer McKeever has welcomed Labour Leader Jeremy Corbyn to ‘the city at the heart of the Brexit conundrum’.

The Leader of the Opposition addressed Chamber members at a Business Breakfast, sponsored by Foyle Port, in Derry’s City Hotel this morning.

Speaking at the event, Ms McKeever delivered a strong message on why 90% of the Chamber’s member companies would prefer to stay in both the EU Customs Union and Single Market.

“We are a city region that sits on a border spanning two counties, two countries, two jurisdictions – and we run businesses serving both. Every day, thousands of us cross the border for work, for education, for health and for trade.

“The EU is not a foreign, far-away bureaucracy – it’s a couple of miles from where we sit. It’s where many of our staff live and where we find our customers, and trading partners.

“Everybody accepts that it would be unacceptable to re-introduce a hard border in Ireland. What is infinitely more difficult to understand is how we can pull out of the Customs Union and Single Market without one.

“The truth is we just cannot see how you can square this circle: To both leave the EU and to ensure no border – to create the unique solution for Northern Ireland and to do it without damaging our peace and prosperity.

She told Mr Corbyn: “Membership of the Customs Union and Single Market has allowed freedom of goods, people, money and services across our border, and allows us access to a market of 500 million EU citizens. It’s under those conditions that we have built the business community that you are sitting with this morning.”

Ms McKeever explained that since the Brexit referendum, local businesses have been “hugely resilient and pragmatic” about the challenges ahead.

“To be honest, two years later our patience is wearing thin,” she added.

She also highlighted the “real damage” caused by Brexit uncertainty to Northern Ireland community relations and political will to work together.

She said that there couldn’t be a Free Trade Agreement in the world which would be “worth sacrificing” twenty years of peace and relative prosperity for.

Bonnie Anley, Chair of Foyle Port, lead sponsor of today’s event, added:  “We welcome the visit to the city by Jeremy Corbyn and his engagement with the Chamber and stakeholders in the area.

“It is vital that many of the senior politicians involved in the Brexit debate come to experience and see the day-to-day business realities that we are faced with, and how any future arrangements might impact upon us.

“Despite the impending negotiation deadlines, we – like many businesses here – feel there is still a lack of clarity in the key areas of trade, travel and customs. As a key driver of the north west economy, we are keen that the post-Brexit arrangements are firmed up as soon as possible.

“We encourage Mr Corbyn on his return to London to impress upon the Government and his own party colleagues that it is imperative a swift and positive remedy is found to the problems any sort of hard border would impose.”