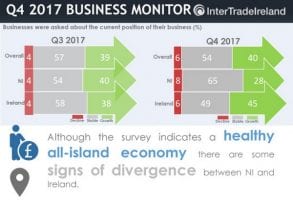 The latest quarterly (Oct-Dec 2017) InterTradeIreland Business Monitor Report indicates the economy across the island is in a healthy position, with 40 per cent of businesses in growth mode and 54 percent reporting stability.

A breakdown of the Business Monitor figures reveals however that significantly more firms in ROI are enjoying growth (45 per cent) compared to 28 per cent in NI.

Despite the high levels of growth, and the fact that 85 per cent of firms are reporting to be working at or close to full capacity, only a small number of firms reported an increase in employment, a fact that might be explained by the large number who are operating on relatively low margins.

Aidan Gough, InterTradeIreland’s Strategy and Policy Director, said of the Business Monitor: “Overall there is a healthy business environment on the island, with an impressive 94 per cent of companies reporting they are in a position of either stability or growth, and 84 per cent indicating they are working close to or at full capacity.

“While this may be a harbinger of inflationary pressures to come, it could also signal an unwillingness to invest, perhaps, until the uncertainty around the future trading relationship between Britain and the EU becomes clearer.

“98 per cent of businesses are still saying they are not formally planning for Brexit. However, we are encouraged by the fact that an increasing number of firms with cross-border sales are revealed as having started informal preparations.

“Over 40 per cent have discussed Brexit impacts with other businesses and 34 per cent have held internal meetings. With the economy in a healthy space, now is the best time to start looking at how Brexit could impact your business and InterTradeIreland is encouraging SMEs to plan, act and engage in preparation for Brexit,” Aidan added. InterTradeIreland’s Brexit Advisory Service offers bespoke help and assistance for SMEs, including a £/€2,000 Brexit Start Planning Voucher, which allows individual firms to work with an approved panel of experts to devise a tailored action plan.