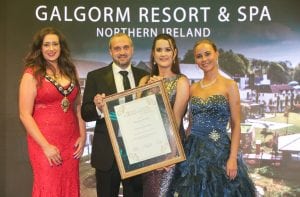 Attracting over 200 guests including VIP’s, luxury spa & restaurant owners from 42 different countries and global media, Galgorm were privileged to have been selected as the host venue on 14th July. It was the first time the awards have been held in the UK or Ireland with previous hosts having included Qatar, Vietnam, South Africa and Thailand.

The Awards are accepted as the pinnacle of achievement for luxury restaurants and spas worldwide. With all 32 categories voted for by diners and guests, they stand to reward and congratulate those restaurants and spas which have excelled in their hospitality and spa offering. Accolades are presented to winners on a country, regional, continent and global basis. Galgorm Resort & Spa played more than just host on the evening, with the Resort joining the winners of the night by taking the top award in 2 categories. The Spa at Galgorm scooped the coveted title of Best Luxury Countryside Spa (UK) while the Resort’s 3AA Rosette River Room Restaurant was named the Best Luxury Hotel Restaurant (Northern Europe).

Speaking at the event, Colin Johnston, Galgorm Resort & Spa General Manager, said; “We could not be more thrilled to have hosted such an exceptional event for the crème de la crème of the global hospitality industry. The hosting of these awards marks another milestone on Galgorm’s journey to becoming an internationally renowned destination Spa.

“With more than twenty awards scooped in the last year and now to have coveted another two prestigious titles we are no stranger to being recognised for our exemplary standards. The Resort has invested more than £35 million over the past 10 years and we have plans for further expansion of over £14 million over the next 5 years.

“The vision behind our continued growth is a commitment to enhancing the tourism infrastructure in Northern Ireland by delivering world-class facilities and providing an unrivalled customer experience.”

With plans for an additional 64 new bedrooms, an exclusive roof top spa, additional external spa garden and executive lounge, Galgorm want to cement their reputation as one of the UK and Ireland’s leading spa destinations by continuing to bring unique first of a kind experiences and facilities to the Resort.

The evening, which was hosted in the Great Hall at the Resort, treated the glamorous international crowd to a mythical Irish themed event complete with a lavish 5 course banquet showcasing the very best in local Northern Irish produce.

The team at the World Luxury Spa & Restaurant Awards extended their thanks to the Resort, saying; “We wish to extend our sincere thanks to the Galgorm Resort & Spa team for hosting such a magnificent event and making each one of our winners feel the true, warm Irish welcome they received at this fine establishment.

“Hosting an event of this stature is no small feat, every detail needs to be considered and every task and request undertaken with care. We chose Galgorm because we knew this would be of no consequence to their highly professional team and we know that the evening was thoroughly enjoyed by all who attended.”