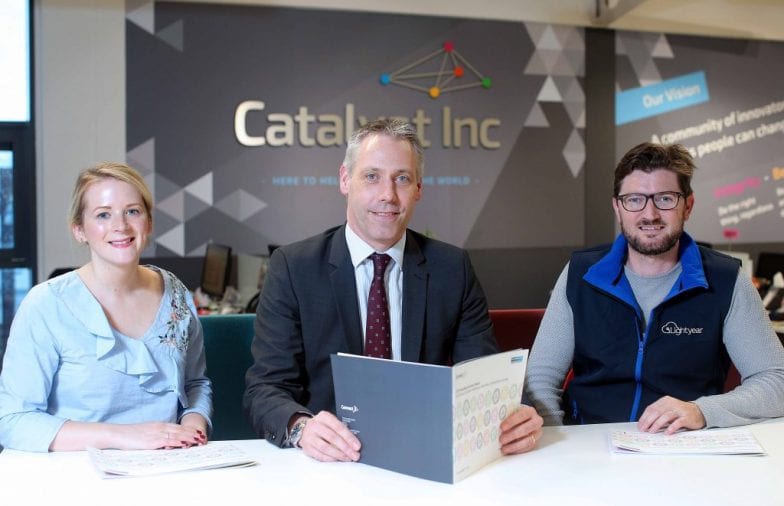 The recommendations from the Connect Knowledge Economy Report called for a rapid reboot of Northern Ireland’s economic strategy to prepare the region for a technology-led modern economy which could see nearly half a million local jobs at risk from automation in the next 10 years.

Speaking at the event which was attended by more than 80 local business leaders, Steve Orr, Director of Connect at Catalyst Inc said the report was a significant wake-up call for everyone and that it was especially important to bring that message to the North-West as a regional hub of excellence in developing and championing the use of technology to drive the local economy.

Welcoming the event to Derry~Londonderry, John Kelpie said that the message from the Knowledge Economy Repot was especially relevant to local job creation and the opportunity to demonstrate how the North-West was leading the way with projects such as C-TRIC (Clinical Translational Research and Innovation Centre) and CARL was vital to reinforcing the importance of specialist hubs.

“We have been building a compelling proposition here in the NW City/Region around the knowledge economy and know how vital it is to be the driver of our own economic success. Our Strategic Growth Plan sets out a bold vision on how we will transform our economy to meet the challenges of the future of work.”

In his address to the North-West audience, Gavin Kennedy, Head of Business Banking NI at Bank of Ireland UK, and report sponsor, said the Knowledge Economy had made some great strides forward but that this year’s findings show we’ve reached a plateau and indicate a need to reboot Northern Ireland’s Economic Strategy if the region is to be prepared for the rapidly changing modern economy.

“In this era of globalisation, rapid technological growth and increased automation it is vital that businesses across Northern Ireland have a strategy to manage the changing economic landscape.

“Northern Ireland has a history and a tradition of innovating and we want to play our part in supporting those businesses who want to seize on growth opportunities in the modern economy,” he said.

Richard Johnston, Associate Director in the Ulster University Economic Policy Centre and lead researcher on the Knowledge Economy report, said: “My findings showed that Knowledge Economy activity growth was strong following the recession, but the rate of growth was beginning to slow.  Automation won’t wait for NI and therefore reinvigoration, refocussing and action is required if NI is to translate activity into tangible economic outcomes.”

Steve Orr went on to warn that NI could not carry on thinking the economy will simply assimilate the challenges it faces without serious policy change and robust planning.

As a first step The Future of Work in NI Solutions Summit, 28th February organised by Connect at Catalyst Inc, puts some of the world’s expert speakers on the impact of Automation, in front of SME business leaders, academics and policy makers, and offers examples of local leaders in the application of automation, including companies such as Coca Cola, Deloitte and Liberty IT.