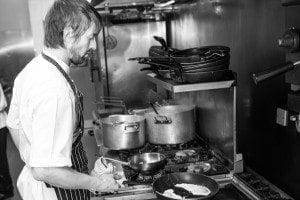 Something exciting is brewing in Ballymena. Galgorm Castle is already blazing a trail as one of Ireland’s leading golf destinations. Major investment within the walls of this ancient estate continues at pace, part of which will see Chris Bell make his mark with the new clubhouse restaurant.

Bell had no hesitation buying into the vision unfolding at Galgorm and when the opportunity arose towards the end of 2013 he was certain it was the right time to come on board.

“I’d worked away from Northern Ireland for a few years but always planned on doing something back home. This is the opportunity I’ve been waiting for,” explained Bell, the first chef from Ireland to win the Gordon Ramsay Scholarship.

What Bell doesn’t know about food and fine dining isn’t worth knowing for he has crammed so much into an already glittering career. Before moving “down the road” to his new challenge at Galgorm Castle, Bell was head chef at the renowned River Room Restaurant at Galgorm Resort & Spa for almost two years. In that time the fine dining restaurant was named Hotel Restaurant of the Year for Ulster and Ireland.

The Gracehill native was also Northern Ireland Chef of the Year in 2003 and 2004 and featured as a finalist on two series of the BBC’s Great British Menu.

With all focus on Galgorm Castle, Bell has collaborated with the highly regarded Mourne Seafood franchise to create something lasting at the estate’s clubhouse restaurant, the aptly named Eagle Bar and Grill.

“I’ve known Andy Rea, one half of Mourne Seafood, for about 20 years. We both worked for Paul Rankin in the late 1990s,” explained the 36-year-old. “I’ve been influenced and impressed by the Mourne Seafood product, it’s quality produce at affordable prices. In a nutshell I believe this is the future of dining in Northern Ireland.”

Galgorm-Castle-CLOSE-smBell was convinced Ballymena was “crying out” for something like this. “I had looked at a few things beforehand then the opportunity at Galgorm came up. It’s very exciting what’s happening here at the estate. It’s a fantastic set up. This wasn’t just a flash in the pan decision for me.”

“Mourne Seafood have come in 50/50 with me and with their know-how and my local knowledge, I believe it makes for a great recipe,” said Bell, who along with his dad and seven year-old son Billy are all members at Galgorm. As dad cooks up a storm, Billy gets to enjoy lessons at the range from Galgorm Castle Head Professional Phil Collins.

And what is the vision for the new restaurant, which must also cater for existing Galgorm members?

“Our ethos is quality food in a casual environment at reasonable prices and we want to make that accessible to everyone. We source local produce from Northern Ireland, use only local suppliers where possible,” says Bell, who lives locally in Broughshane with his wife Katheryn and son Billy.

“Instead of using olive oil or Parma ham from abroad, we use rapeseed oil from Limavady or cured ham from Peter Hannon in Moira. All our meat, fish and veg are sourced locally. Some of our bottled beers are from local breweries, Hildens in Lisburn and Whitewater in Kilkeel.

“We should be very proud of what we produce here in Northern Ireland and we want to showcase top quality, home grown produce. Tourists like this local identity and I firmly believe it’s the way forward. As soon as you walk into the restaurant you’ll know you’re in Northern Ireland!

“I see people from Belfast choosing a day out and coming to Galgorm, bringing their family to the garden centre or golf with the kids and now they have a stylish and affordable restaurant where everyone is welcome. There is such a strong local business hub to tap into here in Galgorm too.”

Bell is keen to create an informal and social dining experience where guests can book in advance or else turn up and enjoy a drink while a table becomes available.

“We’ll have all the usual suspects on the menus, great fish and chips, Irish stew, bangers and mash or steak,” he adds. “But we’ll also have the blackboards out and if people want to try something a little different you can have your lobster, turbot or scallops. There are no set rules. If you want to eat lobster in the bar, feel free. Similarly, if you want a burger in the restaurant, go ahead, no problem.”

Whatever unfolds, Bell is aware of his surroundings. As a golf club all the big sports will still be shown like this year’s Ryder Cup, the Six Nations or World Cup and he and his staff will play their part in creating the right ambiance in a casual environment.

“This is a golf club first and foremost and we want to give the members the clubhouse and facilities they can be proud of. From that we hope to grow a wider customer base because we also strive to create a genuine destination dining venue,” says Bell.

Galgorm Castle Golf Club consistently features at the top of industry-led polls. Last year Golfing magazine ranked Galgorm the second best parkland in Northern Ireland with over 95,000 votes cast by the Irish golfing community. Galgorm was third in the Golf Digest Ireland rankings as chosen by a panel of industry experts.

For years Galgorm Castle has attracted an international audience through the staging of professional events such as last year’s hugely successful NI Open on the European Challenge Tour.

As a destination it promises to gain further traction as an £8million investment programme continues to be rolled out across the 220-acre estate with many other attractions to complement the golf. The ancient castle and courtyard, once owned by the McQuillan Clan and dating back to the 1600s, is being restored to its former glory, while the brand new Creative Gardens at Galgorm Castle is already a hit with locals. Business needs are catered for too at the Courtyard Business Park.

“We believe Galgorm Castle is recognised as Northern Ireland’s new ‘leisure destination’ with something for all the family,” explains Gary Henry, Director at Galgorm Castle. “The championship parkland, golf academy, covered driving range and short game area has received wide acclaim through the staging of high profile professional tournaments.”

“We are also very excited about having Chris Bell on board, one of Northern Ireland’s top chefs, who will head up the new Eagle Bar and Grill Restaurant at Galgorm Castle Clubhouse,” added Henry.

When it comes to golf Galgorm Castle ticks all the boxes, and now with so much more to offer, this Ballymena venue has become Northern Ireland’s destination of choice.

(For further details contact Galgorm Castle on www.galgormcastle.com or call 028 2564 6161)

*Keep up to date with all the latest developments at The Eagle Bar & Grill at (www.theeagleatgalgorm.com)