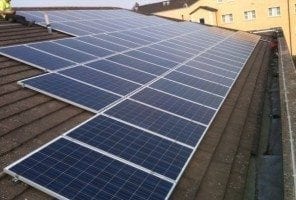 In recent years, rising costs and competition for the tourist pound has seen the hotel trade become ever more competitive. Factors such as these influenced Brian O’Keefe’s decision to install a Solar PV system from Solmatix at the Canal Court Hotel in Newry. Here he describes his experience of solar panels for electricity and of dealing with Solmatix.

“Over the years, we’ve implemented a number of energy efficiency measures in order to stem or cut our energy consumption. But after considering a number of options, solar seemed to be the best way to address the issue of rising energy costs. I’d initially thought about solar for hot water but after attending a trade show and speaking to various companies I came to see that solar PV for electricity was the best way forward. It would also give us a commercial edge by appealing to the increasing number of customers whose bookings are influenced by a hotel’s green credentials.”

“I worked closely with John McParland, one of the hotel’s owners, throughout the assessing and decision making stages.” We considered working with a number of companies but Solmatix were the natural choice. Their engineering pedigree and the quality of the other jobs they’d undertaken placed them far ahead of their competition. John and I were particularly impressed with the work they’d done for Tobermore Concrete. What’s more, the Canal Court Hotel is a family business and we liked the fact that Solmatix is also a local family business, based in Lisburn.”

“The Solmatix survey showed that our south-facing roofs were ideal for the panels, so we installed a 20kW system, with the option to add another 30kW. I can’t fault the quality of their workmanship, nor the way they carried out the installation. In fact it was a very positive experience.

“It’s early days so far, but my first impressions of the system and its outputs are highly favourable. Between our costs savings, Annual Grant Aid and ROCs income, I’m confident we’ll achieve payback on the system in six years, as projected, possible even less. And would I recommend Solmatix to other businesses? Yes, very much so.”

To find out more about the solar PV grants available for businesses in Northern Ireland, call us on 02892601449 or contact us via our website.